In a previous post, I talked about how I got my brother Craig involved in brewing beer when I gave him a home brewing kit that The Minx and I received from Smithwick's. After attempting a red ale using a kit with pre-measured ingredients, Craig decided to tackle a Christmas ale using a recipe from the how-to book included with the beer making kit. Since I was curious to see how the process worked first hand, I came over to his house and we set about making Christmas ale.

Craig had already purchased all the ingredients and equipment necessary from Annapolis Home Brew. We started by measuring out the crystal malt and the black malt. The grains were mixed with 1.5 gallons of purified water and put on the stove to heat to 160 degrees F. Once it reaches the desired temperature, the mixture must be kept between 150 to 160 degrees F for about 30 minutes. Craig attached a candy thermometer to the pot to watch the temperature. After the 30 minutes was up, we transferred the wort to a separate pot for boiling. During this process, all the equipment must be kept clean to prevent bacteria from getting into the brew. Craig kept a bucket of water mixed with PBW (Powdered Brewery Wash) on hand to clean everything as we went along. 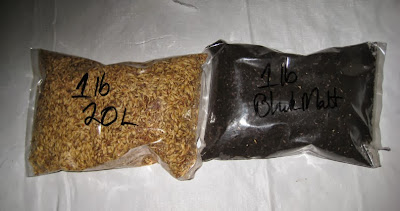 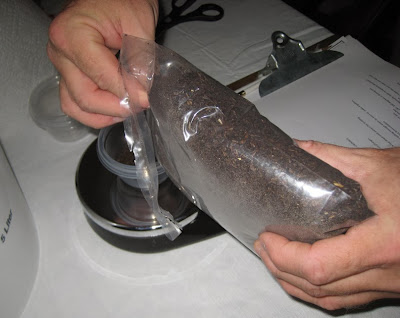 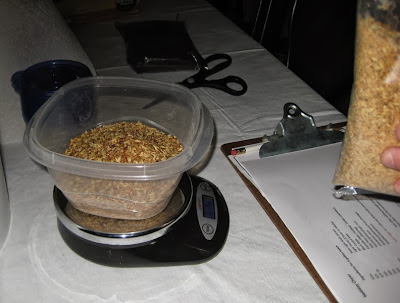 While all this was going on, I was busy preparing the flavorings. I zested the peel from four oranges, chopped up a large knob of ginger, measured out some cardamom, and got a cinnamon stick ready. Honey and malt syrup would also be added to the wort, so we warmed those ingredients by immersing the containers into a hot water bath. Once the wort had boiled for one hour, we added the honey and malt syrup, stirring to incorporate. Then we added some cascade hops. Another 30 minutes of boiling and we added the orange zest, ginger, cardamom, and cinnamon stick. After another 10 minutes boiling, we added a half ounce of saaz hops for aroma.

At this point, the wort needed to be brought down to room temperature, the faster the better so as to avoid bacteria development. Some people do this by putting the pot in a tub of ice, but Craig purchased a nifty device called a wort chiller. Basically, it's a coil of copper tubing with plastic tubing running off each end. One end of the plastic tubing is attached to the water tab, and the other end is placed in the sink. The cooper coil is plunged into the pot and the cold water tap is turned on. As the water flows through the copper coil, it makes the copper quite cold, thus cooling the wort quickly. Of course, the water flows back through the plastic tube and dumps into the sink. It was amazing to watch the temperature drop on the candy thermometer. We had the wort cooled from boiling to room temperature in 20 minutes.

With the wort cooled, we strained the liquid into a plastic bucket. The ingredients kits put the grains in steeping bags, but since our ingredients were loose, we used a giant strainer placed over the mouth of the bucket to catch all the gunk. We also used a siphoning tube to drain the wort from the pot to the bucket so we could control the flow. A few times in the process, we had to stop and empty out the strainer because there was so much detritus in the wort. Eventually, we got all the wort into the bucket. Then more purified water was added to bring the mixture up to five gallons.

The how-to book we were using recommended that the wort be agitated to incorporate some air in the mix. A stirring wand was provided with the home brew kit, but Craig channeled his inner Alton Brown and bought an electric bubble making device used for aquariums. After a few minutes of bubble making, Craig took a reading of the wort with a hydrometer.

In order to ascertain the alcohol percentage by volume of your brew, you must measure the original gravity* when the wort is first made and then measure the fermented gravity after the wort has fermented. You run these two numbers through a special formula to reach the alcohol percentage. The two measurements are taken with a hydrometer. Simply drop the long stick-like device in the bucket and read off the number at the surface of the liquid.

The final step is to pitch the yeast in water and add that to the wort. Then we put the lid on and added the airstop. The airstop is filled partway with water. After 24 hours, one should see bubbles in the water, an indication that fermentation has begun. The bucket needs to be stored in a cool, dark place for six days. We used one of Craig's closets for that.

After six days, the wort is transferred to a clear jug known as a carboy. They come in plastic or glass, but glass is better because it can be more thoroughly cleaned between uses. The airstop is placed in the carboy and the fermentation continues for two more weeks.

The final step is to add sugar to start carbonation and pour into bottles. Once the beer is in the bottles and capped, it should sit for at least another two weeks to develop full flavor. Although we started this process in September, we decided to wait until Thanksgiving to drink the beer. I was disappointed that the cinnamon flavor was not more prominent, but it had an interesting flavor all its own. The Minx described it as a cross between Coca-Cola and beer. We used it to make shandies for our Thanksgiving dinner and they were quite tasty.

* Gravity refers to the relative density of the wort compared to water at various stages in the fermentation. It largely depends on the amount of sugar in the wort.