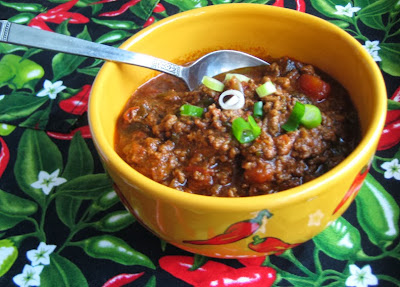 It's football season, and that usually means my Sundays are consumed by Ravens' games. Since most games start at 1pm, they cut into my normal Sunday afternoon cooking and baking time, which means I have to come up with something that doesn't involve a lot of prep or a la minute cooking for dinner. My go-to Sunday dish is chili.

I feel like I make chili a lot, so I find myself trying to alter my usual pretty-darn-good recipe so I don't get bored. One week, there was a surfeit of poblano peppers at the local farmers' market, so I bought a bunch. I figured I could make a chili that had several kinds of peppers in it, since I usually do have various dried chiles in the cupboard and always a jar of chipotles en adobo in the fridge. I also added a couple different chile powders, including the smoky-flavored pasilla negro powder I recently purchased at Spices Etc.

The resulting bowl of red was meaty and spicy, which more than made up for the Ravens' lackluster performance.

Roast poblanos over an open flame until charred all over. Place charred peppers in a bowl and cover with plastic wrap. When cool enough to handle, rub off the skin, remove the stem and seeds, and cut the peppers into small pieces.

Snip stem end off New Mexico chiles and shake out seeds. Soak chiles in boiling water to cover until chiles are pliable. Break into pieces and put in a blender or mini-prep food processor with enough of the soaking water to make a puree.

In a large pot or dutch oven, cook the onions in a bit of oil and a pinch of salt until onions are translucent. Add the ground beef and cook, breaking up with a wooden spoon, until meat is cooked through. Add garlic and spices and stir well to combine.

Add poblanos, New Mexico chile puree, tomatoes, Sriracha, and beef broth to the pot and bring chili to a boil. Turn heat down to a bare simmer and cook for about 2 hours, or until meat is very tender. Add more cumin, coriander, and chile powders to taste, along with salt and pepper.