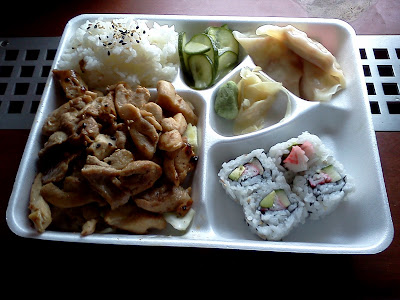 Even better is the Korean burrito filled with bulgogi beef or marinated short ribs and a dash of kimchi.

And then there's my new favorite truck, Busia's Kitchen. I couldn't believe my eyes when I saw the candy-striped truck outside my building. "Busia" is an Americanized-Polish name for "grandma," and I was excited that a truck would serve the cuisine of my people. I tried a sampler of three items of my choice (a fist-sized pierog, a potato pancake, and one of the stuffed cabbage rolls called "golombki"). 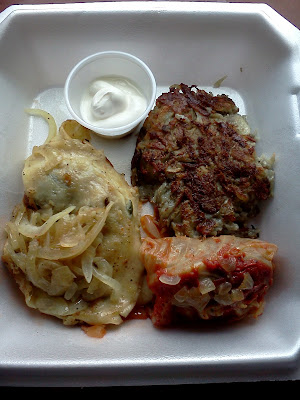 They were all pretty terrific, very grandma-style. I was impressed and very pleased. For those folks who aren't quite ready to experience the food of Poland (wimps), there are egg salad and tarragon chicken salad sandwiches and a very un-Slavic Mediterranean chicken pita.

Another truck making the rounds is Karlita's, which serves Latino food like burritos, tacos, and quesadillas. I had a steak quesadilla that was very simply made with lots of melty cheese and found it to be extremely satisfying. Next time I'm trying a burrito, or maybe the tacos. Or maybe something else will catch my eye.