Yayyyyyy!! Only one hour of FN Star this week! That makes me almost insanely happy! You might think I'm over-reacting, but honestly - how many of you enjoyed seeing every single fuck-up made by every single fuck-up? What happened to the time-honored tradition of showing only the best and the worst until there are few enough contestants that everyone can be included in the hour time slot? Was this 90 minutes of hell begat by Project Runway's new format?

Ok, with my weekly rant out of the way, let's begin the recap. The show starts out at La Maison des Wanna-bes, where we are shown scenes of the women performing their daily grooming rituals. We didn't really need to see how rough they all look without makeup. Ugh. But I guess it's better than seeing the guys beat their chests and scratch their balls. 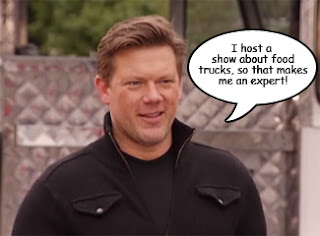 This week's Food Network Celebutard is Tyler Florence, the "food truck master." As far as I can tell, he can perhaps be called "master" of cookware, cookbooks, and a couple of restaurants. Maybe even his own domain. But does he actually know a damn thing about food trucks? Anyhoo...he's desperate to plug the latest season of his show, The Great Food Truck Race (the first season of which wasn't all that great). In fact, this whole episode is a shill for that other show - what other reason could there be to make potential Food Network "Stars" work in food trucks? 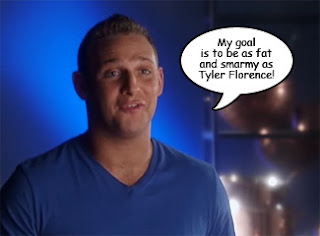 For the challenges this week, the nine Wanna-bes get divided into three teams of three. First, each team will shoot a 30-second commercial, which will be shown to 150 food truck patrons who will, based on the commercial, decide which one truck to try.

The teams are given a few minutes to discuss concepts and plan their commercials. Vic says that taco trucks are the most successful, so he wants to do a wacky taco truck featuring things like a Philly cheesesteak burrito. They're calling it Fierce Food Fusion. The trio shoots their commercial and both Vic and Jyll seem really vibrant and professional, while poor Orchid seems a bit meek. I am galled when Food Truck Master Tyler Florence points out that she said, "really good" three times. Mind you, this is Tyler Florence, a man who has only about three adjectives himself, "phenomenal," "fantastic," and "awesome." Asshole.

The Blue Team has decided that they will be cooking the spherical foodstuffs of various cuisines. Jeff, with his usual sophomoric humor, decides they *have* to call their truck Balls on the Road. Whitney, who is trying hard to lose the slide rule that's jammed up her ass, insists she's fine with it, but Susie says it's a bit out of her comfort zone. The commercial they create is completely off the wall, with good energy, but um...batshit stupid. 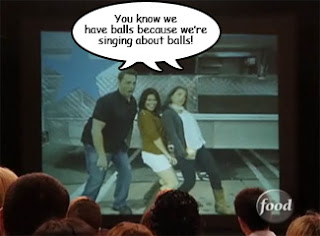 The Green Team, with enemies Mary Beth and Penny once more stuck working together, are doing wraps. Frat Boy decides, since it's one guy and two gals, that Charlie's Angels will be the theme of the commercial, even though there were three Angels, and Charlie was merely a voice over a speaker. Unfortunately, the two women are dumb enough to go along with him. Embarrassment ensues.

The next day, the Wanna-bes find their food trucks ready to go; they are emblazoned with cheesy stick-on lettering in faux Art Deco fonts, obviously purchased from an art supply store that was going out of business. All three members of Team Balls are putting on headbands because Jeff says his brings him luck. It also has the unfortunate side-effect of making Loverboy tunes run through my head. Jeff's making Italian-style meatballs, Susie is making Mexican-style meatballs, albondigas, and Whitney is making felafel. Somewhere on the other side of the lot, Middle Eastern Penny is probably fuming that some Chinese chick dares to meddle in her own personal cuisine.

On Team Wraps' truck, Mary Beth is making sure to stay far out of the way of both Frat Boy and Middle Eastern Penny. Frat Boy is making a butter-poached lobster wrap with cream cheese, which sounds dees-gust-ing to me. The heavy cream cheese will definitely overwhelm the delicacy of the lobster - any moron should know that. But I guess Frat Boy isn't just any moron. 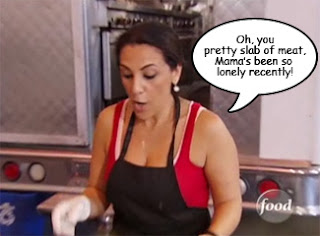 Penny is in love with the filet mignon she's bought for her beef kabob-and-Greek-salad wrap. She keeps cooing over it and petting it as she trims what little fat it has; in the meantime, she's losing time. Because she's a good sport, Mary Beth offers to chop onions for her unpleasant slow-poke teammate. She admits that her own wrap, a gingered chicken, has mild flavors but is completely delicious. Famous last words.

On Team FFF, Vic is making what he calls a "Phillyrito," with American cheese, chopped up hamburger, guacamole, and jalapenos. At that description, I am failing to conjure up the flavors of a Philly cheesesteak in my mind, but hey, maybe those crazy kids in Philly are into avocado these days. Jyll, whose crappy taco almost got her sent home last week, has decided that this week's shrimp po'boy taco will mean redemption. Orchid is going with her roots and doing a Filipino pork adobo taco with slaw, but she's worried that the flavors just aren't right.

Soon a huge crowd pours into the area and it's commercial time.

The crowd seems to like FFF's spot. Wrap it Up is deemed a bit cheesy. Balls on the Road leaves some people agape, which gives Jeff second thoughts about his whole concept. Too late, dumbass. 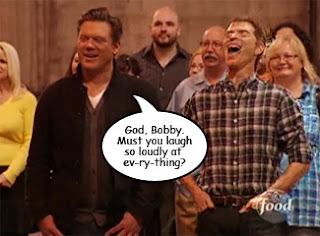 After the commercials are aired, the crowd forms lines at the trucks whose wares they want to sample: FFF and Wrap it Up. Most folks at FFF want Middle Eastern Penny's wrap, but she's still poking around and not getting anything done. Mary Beth works the line and jokes with people so they don't feel left-out or forgotten. Eventually the steak wraps come out and are a real crowd-pleaser. Not so much Frat Boy's lobster-less lobster wraps and Mary Beth's bland chicken wrap.

The crowd is happier at FFF, where Jyll is cracking jokes and Vic is "awesome" and being compared to Vin Diesel. Orchid is feeling left out, and the diners are not loving her taco. [insert dirty joke here]

Meanwhile, Balls on the Road is having trouble attracting cockroaches. The three of them are feeling like a giant fail. When they do manage to cajole a couple folks over, however, the customers love their food and their personalities. Maybe not Whitney so much, because her felafel balls are mushy. And who likes mushy balls? 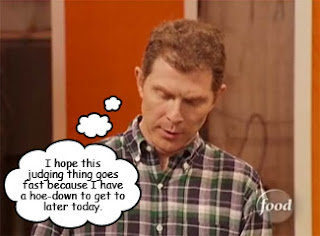 Then the Selection Committee plus Food Truck Master Tyler Florence make the rounds. They love Middle Eastern Penny's wrap, but compare Frat Boy's unfavorably to a bagel with cream cheese. Tush feels Mary Beth's isn't inspired and it reminds him of leftovers. Over at FFF, Vic is "magic," Jyll is fantastic, but Orchid's personality and food are both lackluster. 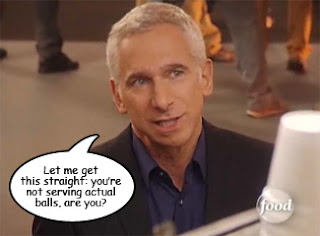 Finally, over at Balls Are Now Roadkill, Jeff's meatball sandwich is enjoyed by everyone who tries it, as is Susie's albondigas soup. Whitney's felafel, however, scores no points with the judges. 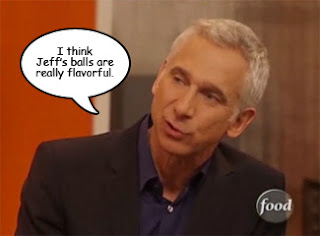 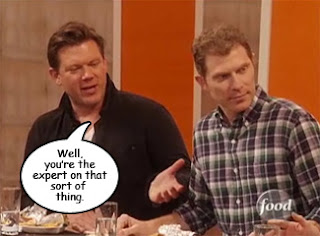 Another rant: While this episode is only an hour long, it seems that 25 minutes of it has been commercials. I'm getting really sick of seeing the same damn Cheez It and State Farm commercials over and over and over again and am making a point never to spend my money on either product.

Eight commercials later, we get to the judging. Team Wrap it Up is asked to describe their experience; immediately it comes out that Middle Eastern Penny held up service a bit with her slowness. Then Mary Beth and Penny start fighting about chopping red onions, during which Penny decides it's really mature to literally show her claws and hiss like a cat. 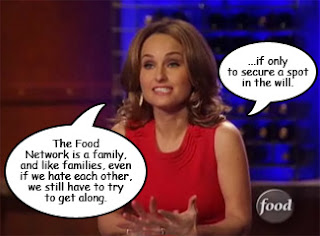 Giada admonishes her, but with a smile on her face because she is no doubt entertained by all of the idiocy. The Selection Committee plus Food Truck Master Tyler Florence then tells Frat Boy that his wrap was "nasty" and had too much cream cheese, the Charlie's Angels gimmick was juvenile, and Mary Beth's wrap was a snooze.

Team Fierce Food Fusion was a big hit. They interacted well with the customers, and their commercial was great. Tushface thinks Vic has gone from being a dark horse to a contender, Jyll was entertaining, but Orchid just faded into the background.

Finally, Team Balls on the Road was called sophomoric, but the Selection Committee plus Food Truck Master Tyler Florence admitted that both Jeff's and Susie's meatballs were delicious. Whitney's not so much, and Tush feels like she is too eager to please all the time but not showing her true self. (Of course, when she showed her true self in the first couple of episodes, the judges didn't like her.)

One winner was chosen from each team: Susie, Vic, and Middle Eastern Penny. Vic gets the overall win for his food and his awesome Vin Dieselness. On the bottom are Mary Beth, Orchid, and Whitney, who are made to wait backstage while the Selection Committee plus Food Truck Master Tyler Florence think about it a little more. I'm thinking that Whitney is going to get the boot this time because the judges really do like Mary Beth's personality, and have always complimented Orchid. Surprise! Orchid is this week's victim. While she's great on camera, Selection Committee plus Food Truck Master Tyler Florence isn't sure she could hold an audience for a full 30 minute show. Plus, compared to the rest of the strong personalities left, she's boring. 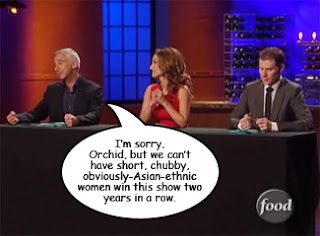 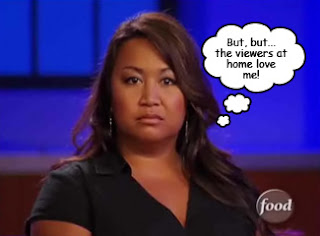 Next week - the Wanna-bes cook for Wolfgang Puck, and even better, there is a double elimination!