This week, the episode starts off with scenes of Whitney, clearly upset at being on the bottom last week (even though it was mostly by default), calling her mom to whine a bit. Because last week's loser edit seemed so obvious, yet a different person went home, I'm thinking this is just a red herring. Or is it?

Ok, so it's probably not worth trying to make this more interesting than it is, since nobody really cares. And there are still ten Wanna-bes left in this competition, which means what? Another 7 or 8 weeks? Sigh.

Anyhoo, we also see that Middle Eastern Penny is turning into Richard Nixon. She's so paranoid, she thinks all of the Wanna-bes are against her, particularly the "clique" of Susie, Jyll, and Mary Beth.

Eventually we see all the Wanna-bes and wacktoids get into their sponsorship mobiles and go to Mel's Drive-In, where of course King Douche Guy Fieri is waiting around the corner, ready to pull up in his rented convertible. 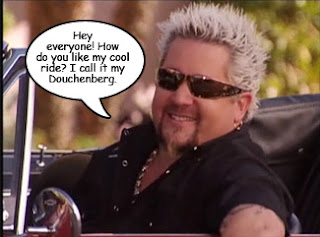 He tells the oddly-thrilled-to-see-him Wanna-bes that they are going to play Diners, Drive-ins, and Dives, because eventually one of them is going to be forced to drive around the country eating other people's food. I volunteer Vic Vegas for the job because I'm thinking he won't win, but FN will still want to give him a job.

Each episode of DDD generally has five parts, and two each of the Wanna-bes will play at filling these roles, with four chances (takes) to get it right.

Because this is yet another damn 90-minute shit-fest, we are forced to watch each and every Wanna-be strut their stuff in front of the cameras. Most performances are decent enough. Vic starts things off and doesn't seem too bad until we see Guy making fun of  his "can't put my arms down because my biceps are too big" walk. Whitney and Mary Beth both seem pretty comfortable with their segments. 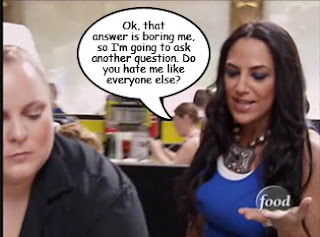 Middle Eastern Penny is all about Penny and practically attacks the poor server she is assigned to interview, interrupting her while she's answering questions to ask new questions and even making Guy feel uncomfortable.

Justin D, as last week, has a problem with saying too little and finishing too early (his poor wife!). On his second take, however, he seems possessed by some new hip-hop-style douche who waves his arms around and makes gang signs. Kinda like Guy Fieri. 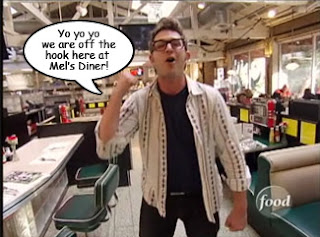 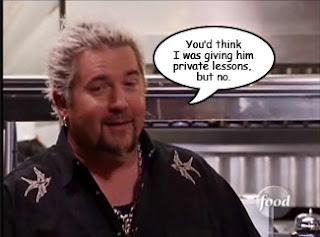 Eventually, everyone is done and Guy gives them their next challenge. Apparently in the Food Network Star Universe, the next day is the 4th of July (what a coincidence!) and the Wanna-bes are going to be cooking for an MGD 64-sponsored "All American Food Festival," taking traditional picnic items and giving them a twist, then feeding them to 150 Food Network fans. Oh whee - now we're going to see a dozen commercials for cheap crappy low-cal beer.

Guy assigns the dishes to the Wanna-bes:

With only 2 hours to cook, Orchid is nervous that she's been assigned brisket, but rather than buying a cut of meat that would take less time to cook, she buys an actual brisket. Most of the other chefs do a more creative riff on their dishes. Jeff is turning his pretzels into a crunchy coating for chicken, which of course he will be putting in a sandwich served with a beer-infused sauce. Middle Eastern Penny is throwing the whole sausage and peppers thing out the window and making lamb kabobs with a tabbouleh salad. Vic is taking his lobster roll to Vegas by adding caviar and lots of garlic.

After the cooking is done, we again see Middle Eastern Penny whine about how nobody likes her. Jyll calls her out and basically tells her that she reaps what she sows. But Penny is "done with it." Last week she was "thrown under the bus." Wanna bet next week she says, "I'm not here to make friends?" That woman could be her own drinking game. 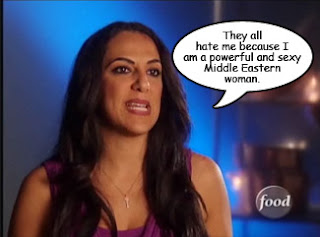 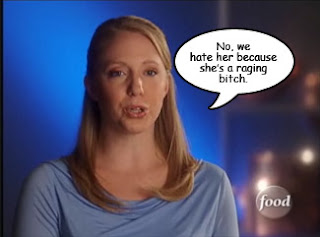 The next day, the Wanna-bes get back into the sponsorship mobiles and head to the venue. Guy has changed the name of the event, which he now calls the "4th of July All American Off-the-Hook Festival." He also tells them that there will be live entertainment - them. Before serving their food, they will have to do a three-minute cooking demo to the crowd plus the Selection Committee. He offers tons of props for them to go "as off the hook" as they want. Because, as we all know, the Food Network loves a clown.

Frat Boy is up first. He gets into it but takes too long and doesn't pay attention to the dude telling him how much time he has left. He's not bad, but he doesn't finish and also doesn't take a breath the entire time he's on stage. Susie, who seems to be becoming a favorite of the judges, talks about her Mexican family and the Latin twist she adds to her version of coleslaw. Bride of Fogelstein and company loves her. They're also really fond of Jeff, who comes out with a guitar and a headband and proclaims himself to be the King of Sandwiches. 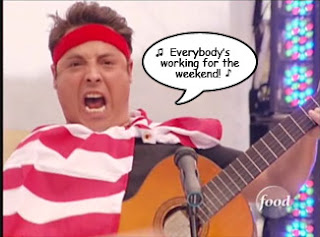 Vic also pleases the crowd in his red wig, but I thought he was a bit cheesy and melodramatic with a story about how his granny would stand in the kitchen with a rolling pin on her shoulder. Seems a bit threatening to me, but Vic saw it as love. 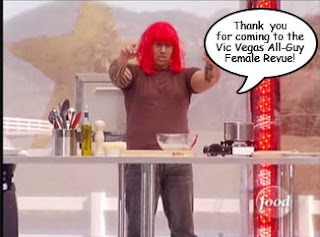 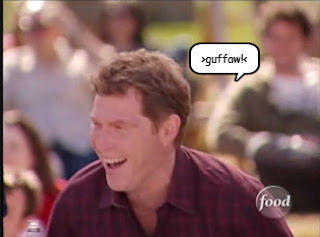 When Penny gets on stage, we find that she is inexplicably dressed like Betsy Ross. She tries to get the crowd excited, but instead they seem to be falling asleep. There is literally silence. Her demo falls flat and she ends up not finishing in time.

And Justin D shows yet another persona, but not his own. 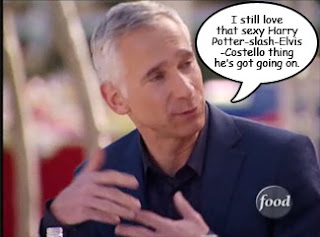 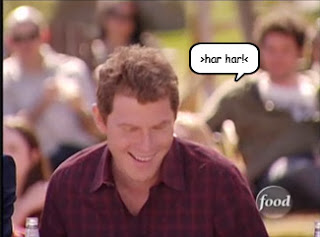 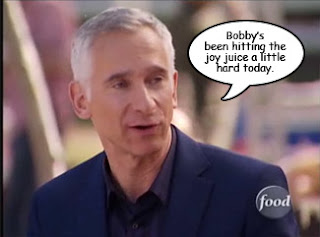 Finally the most uncomfortable part (for them - ours is ongoing) is over and the Wanna-bes have to get their food set up and ready for the hungry hoardes. Despite snoozing during her performance, the crowd seems to love Middle Eastern Penny and her food. She's rolling kabobs and bringing in crowd members to help her roll. I hope she had bottles of hand sanitizer available, cuz I wouldn't be eating that stuff after someone who probably recently used a Porta-Pot touched it. Susie also has a crowd at her table and everyone seems to enjoy her avocado-laced cole slaw. The judges think her food is a knockout.

Jyll is just stupid. She says she's not familiar with Mexican food, since she's from the Midwest (yes, we've heard your boring-ass shtick before), so she makes a non-Latin carne asada. However, she claims to be using "traditional" "mancheNgo" cheese. Well, first of all, it's manchego, no second n. Second, it's a Spanish cheese. From Spain. Whole different continent and culture there, kiddo. Bobby then insults her taco, saying it looked as if a 5-year-old made it. <insert dirty joke here> 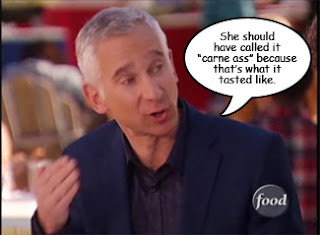 Justin D, meanwhile, has found yet a third persona to show the judges, and Guy calls him on it. His burger is not seasoned properly, which doesn't help him one bit.

Back at Judges' Table the studio where they film the eliminations, Susie is praised for both her presentation and her food. Whitney's fun presentation and good food causes Bride of Fogelstein to declare this a breakthrough week for her. Vic was the crowd favorite. Jeff's performance was fun and his sandwich was the best he's made so far.

Justin D has confused Tushface who wants to know which persona is the real Justin. Jyll seemed defeated from the start, both promising and delivering lousy food. While her persona is polished, she'd be better off on the Weather Channel than the Food Network. 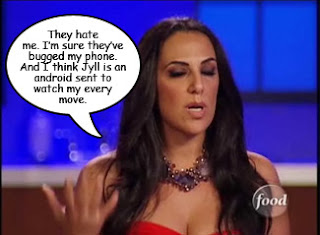 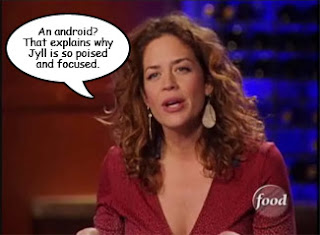 Middle Eastern Penny's Middle Eastern food was flavorful and made sense, but her presentation wasn't great. She blames it on the lack of love she's feeling from her co-competitors. Jyll jumps in to say that Penny is the most entitled person she has ever met. She's then scolded by Fogelstein who says Penny is only human and that they need to get along better. 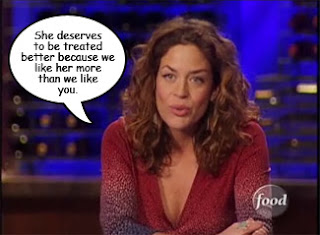 On top of the pack are Vic, Susie, and Jeff, with Susie getting the win. Whitney, Mary Beth, and Frat Boy are not perfect but safe. And Penny is also safe; though far from perfect, her food was "exceptional."

That leaves Jyll, Justin D, and Orchid on the bottom. Jyll's eternally perky persona is unnerving, and Orchid hasn't shown any growth in the past five weeks. But Justin's strange new Dr Jeckyll and Mr Hyde persona switcheroo left as bad a taste in the judges' mouth as did his unseasoned hamburger.

I kinda liked Justin D - a fellow food blogger - and am sorry to see him go. But he was starting to embarrass himself and it was time. Now to get rid of everyone else....