Oh, I got so excited while watching the previews this week. I kept thinking, "Wow, look! It's Blais! And Jen Carroll! Whee! If I had the opportunity to cast this season, I would have included just about everyone participating (except for Casey, whom I never liked and after she badmouthed Carla, never will - notice how she says she's "done with TC," yet is magically back after they waved 200K in her face) plus Andrew "Culinary Boner" d'Ambrosi because he's insane and Stefan Richter because he made me laugh. And Bryan Voltaggio. Of course.

The seventeen remaining recheftestants enter the Top Chef kitchen to find Padma hanging out with one of those pesky Jonas Brothers, Joe. (At least Bravo had the sense not to get Justin Bieber - he'd just get hair in the food.) Some of the chefs seem bemused, others are pleased. 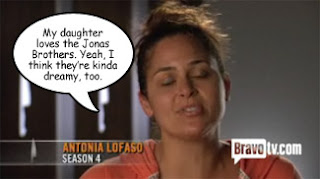 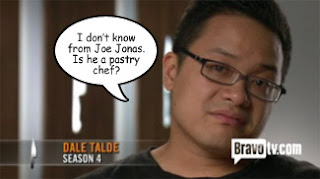 Anyhoo...Padma goes on to introduce both Joe and the challenge: 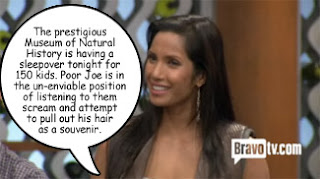 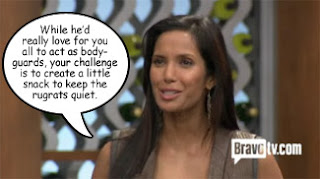 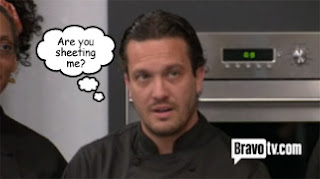 With the expression on Fabio's face, what else could he have been-a theenking? 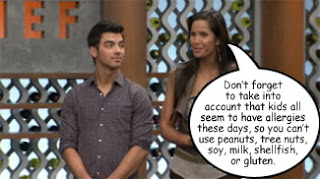 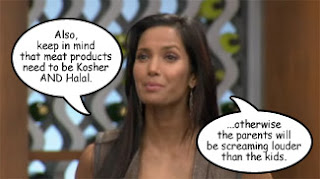 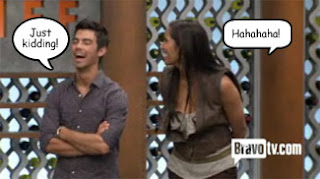 So, to sum up: the recheftestants have to create a "midnight snack" for a bunch of kiddies. They will have no utensils or plates, and the snack must be served in a brown paper bag. To match the brown paper bags that all of the museum curators and chaperons will be carrying around with them, if you know what I mean. Joe Jonas and his refined tastebuds will choose the winner, who will get immunity and an advantage in the Elimination Challenge. 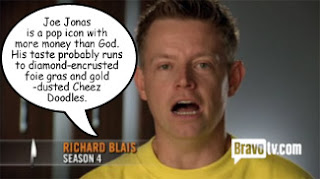 With rare exception, the recheftestants don't seem exactly thrilled to be cooking for kids. 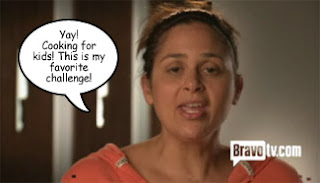 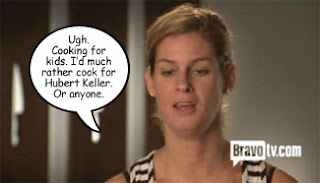 After 45-minutes of cooking, Padma and Joe return for tasting. There are seventeen dishes, and I am going to avoid describing them except to say that Dale Levitski made a sugary concoction that he called "crack" and Fabio tells the judges that "in Eetaly, midnight snack ees roast cheeken and pasta." 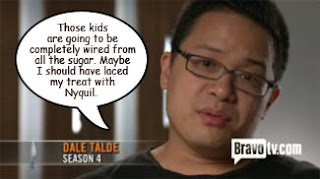 After tasting, Joe determines that Tiffany, DoucheyMike, and Stephen made his least-favorite dishes. On top are Spike and Tiffani, but he's so torn between them, Padma announces a twist: the two must recreate their dishes in bulk and serve them to the children at the museum that night. Let the brats little angels decide.

Because they now must prepare their dish for 150 people, the other recheftestants are enlisted to help them, in the form of teams.

Wait - where's Fabio? Oh, he got left for last, so Padma asks him which team he would like to work with. Taking it personally, Fabio grumbles and chooses Team Spike. Because of course that team needed yet more testosterone.

After preparing tons of snacks, the teams shovel them into red and blue paper bags and haul them to the museum where they are greeted by a hoard of maniacal midgets, already sugared-up and rarin' to go. 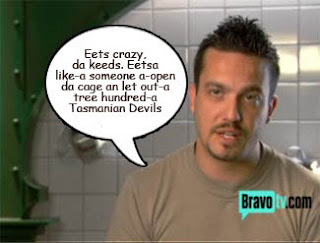 Some of the chefs look downright intimidated by the kids. 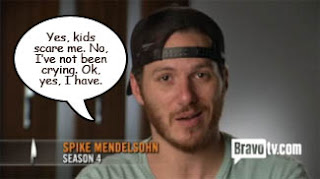 Others decide to brave the hungry beasts little darlings and campaign for their team's snack. In the end, Tiffani's sugar bombs win over Spike's carrots and potatoes.

Relieved that the day is finally over, the recheftestants are about to head home when Tom strolls in and announces that their Elimination Challenge will start right then and there. They will be staying at the museum overnight and preparing a buffet breakfast for the little bastards darlings and their parents, starting at 7:30 AM. The two teams will have to represent two dinosaur types that are in the museum's collection: the carnivorous Tyrannosaurus Rex, and the vegetarian Brontosaurus.

Why do I suddenly feel like Fred Flintstone should be the guest judge?

As the winner of the Quickfire, Tiffani is allowed to choose which dino's diet her team will work with. Thinking it would be advantageous to have bacon and eggs in a breakfast challenge, she chooses the TRex. That means Spike's team gets fruits, veggies, and grains.

But first...a brief and unrefreshing nap on cots in the hall of North American Mammals, where we find that Tre likes to sleep in the nude. Unfortunately, the viewing audience is denied that particular treat.

At 4AM, the gang heads into the museum's kitchen to start work. What Tiffani didn't hear when Tom presented the choice was "meat and dairy ONLY." "Only" meaning no grains, no herbs. Meanwhile, Team Bronto was well-chuffed that they could make lots of goodies...only to find that they didn't have access to eggs or butter. However, the Brontos seem to have an advantage. Especially when TRex Jamie cuts her finger and has to go to the hospital for stitches. The rest of the chefs say they would have taped it up and gone on, and Fabio reminds us of how he broke his feenger in his season and still managed to cook. Tell 'em, Fabio: 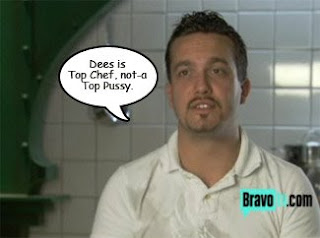 Jamie has always been an annoying little whiner. And while her team is one man down, her partner in crime for this challenge, Jen Carroll, is cooking their dish herself.

Eventually they are done in the kitchen and have to prepare the buffet, outside. 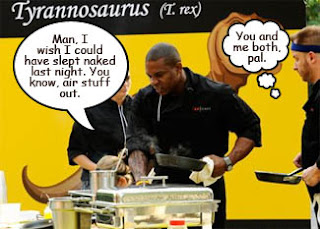 During the hour of prep, Angelo determines that the plums in the dish he's making with Blais and Marcel are too big and instructs Carla to cut them down. This pisses off Marcel, who immediately suspects Angelo is the kind of guy who will resort to sabotage. 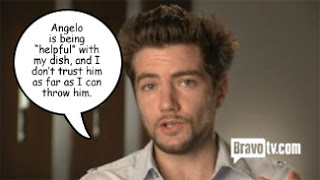 Jamie returns with two whole stitches in her finger, which prompts more "I'd have duct-taped it and continued cooking" from the other annoyed recheftestants. In other words....

As if Jamie isn't annoying enough, we then find that Season One hostess Katie Lee-no-longer-Joel is our guest judge. Hell, even Joe Jonas is more interesting. But anyway...the judges make their way to pick up their buffet breakfasts and choose to dine at tables with parents and kids, to get their reactions on the dishes. 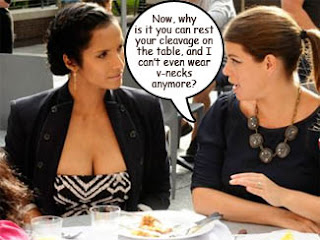 While Team TRex seems to have the longer lines, Team Bronto's food gets more kudos from the judges who particularly enjoyed Fabio and Stephen's gnocchi (which Fabio later points out was made without eggs or butter) and the banana parfait prepared by Blais, Marcel, and Angelo. 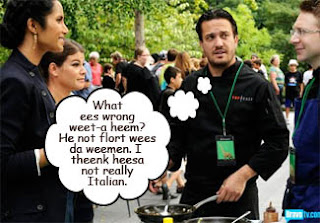 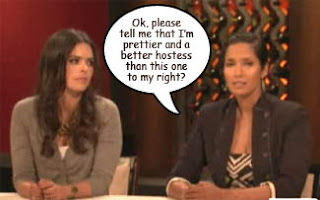 Later, back at TCHQ, Padma calls Team Brontosaurus to face the judges. They are declared the winner, with the top accolades going to the banana parfait. When Team TRex faces the firing squad, Jen gets super defensive of her dull dish and does a lot of mouthing off at the judges. Tre is also in trouble for his over-reduced sauce. Back in the stew, Jen declares that All-Star Jen is not the same as Season 6 Jen. Which proves to be true...Season 6 Jen ended up in the Final Four, but All-Star Jen is sent packing in episode two.

No surprise there. If you listen to Elia Aboumrad's interview with Laura K on All Top Chef, you'll hear that her best friends on the show were Jen, Dale L., and Spike. So I'm betting the latter two aren't going to be around for much longer, either.

So what did you think? Please leave a comment. :)

My recap is HERE

If you weren't for you and David's recaps I would have totally lost interest!

Ya know, when I first watched the episode, I was thinking there had to be some kind of restriction against using any of the 101 items that spark allergic reactions in kids these days.

Unless that's part of the fun.