I never read Julie Powell's Julie/Julia project. Well, I tried to, but was instantly bored. She's not the most entertaining writer in the world, and it pissed me off that she got a book deal out of something that was so clearly a gimmick designed to do just that. I much prefer the bloggy stylings of Carol Blymire, currently working her way through the Alinea cookbook after having cooked everything in the French Laundry cookbook. Carol is a seriously good writer. Funny as heck. I feel like I know her. And it bites that she'll never have a movie made about her because she was the second person to cook her way through the books produced by some major culinary minds.
Anyhoo, I may or may not see this movie. I love Meryl Streep, and Amy Adams doesn't annoy me. Other foodie types attended the recent premiere, including Tony Bourdain, shown here with his lovely wife Ottavia. 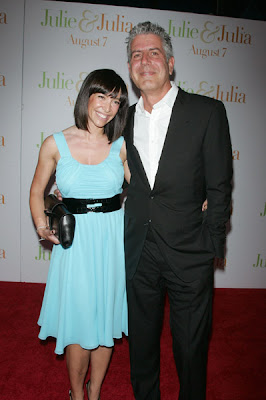 You have to read about his encounter with pure evil at the Julie & Julia after party. The evil otherwise known as... 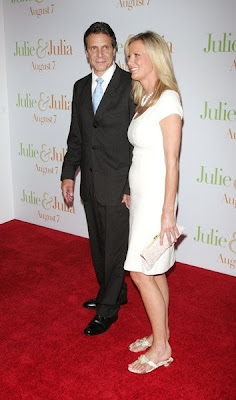 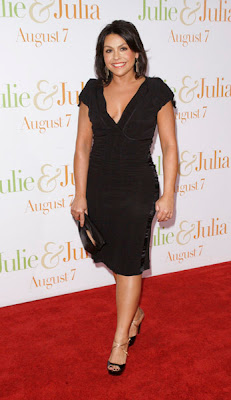 Rachael Ray was there too, showing off the sides of her boobs. Ick. 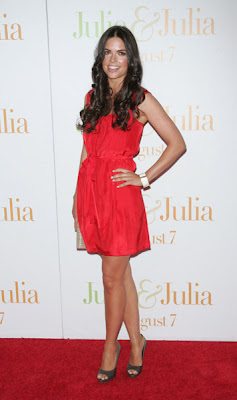 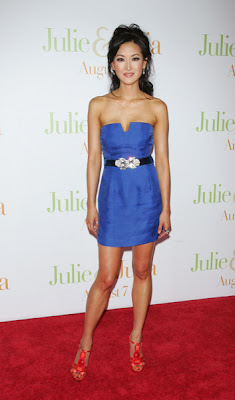 ...and current Top Chef Masters hostess Kelly Choi. Ms Choi is really strikingly pretty. I met her in person outside of Cipriani after The Fashion Show finale taping. She's very tall (5'10") and even skinnier in person than on TV. She was wearing jeans and her ass was like 8" wide. I can imagine she's not a big fan of the cheeseburger....