For our third and final Restaurant Week feast, I thought Meli would be a good choice. The choices were extensive - it was their regular menu - and we had never eaten there before.

I'd say the meal was, for the most part, successful, particularly the appetizers. 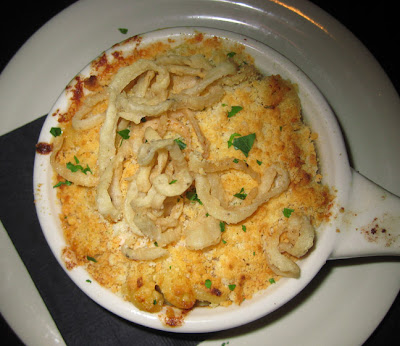 Mr Minx ordered Meli's Lobster Mac & Cheese which had aged Cheddar, applewood smoked bacon, lobster, and was topped with panko and crispy onions. It had an old-fashioned, home-cooked, baked mac & cheese flavor. We enjoyed it but agreed that there might have been too much crumb topping. 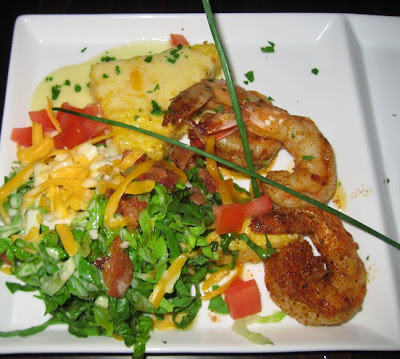 MinxBro ordered the Shrimp & Grits BLT. I expected it to be stacked, since the grits came in cake form, but it was kind of sloppily arranged on the plate. The shrimp were nice and spicy, full of that iodine flavor I love, and there was a cheesy sauce on the grit cakes that kept the dish from being dry. 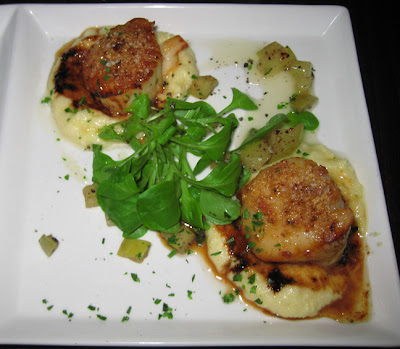 I went for the seared diver scallops, because I am a sucker for scallps. The two medium-sized specimens came atop come very creamy polenta, with a green apple relish and a pancetta honey vinaigrette. The scallops (which were slightly overcooked) had a crispy sweet topping, almost as if they had been bruléed. The polenta was mostly for texture, because I couldn't detect any flavor. But the green apple bits were delicious and their tartness, coupled with that of the vinaigrette, made the dish. 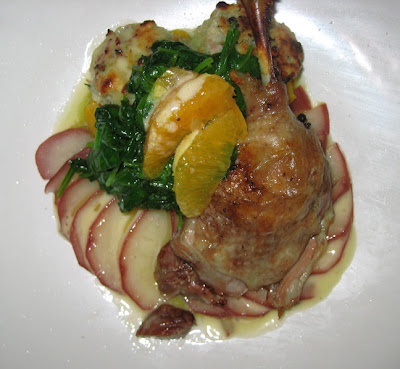 For his entrée, Mr Minx chose the "duo of duck" which included a confitted leg, duck bread pudding, and honey wine-poached pears. Although the dish was quite delicious (at least the bites I had - the bread pudding was fantastic) Mr Minx didn't quite feel satisfied and he didn't like the sweet sauce at the bottom of the plate. I think the problem was: too much pear, not enough duck. 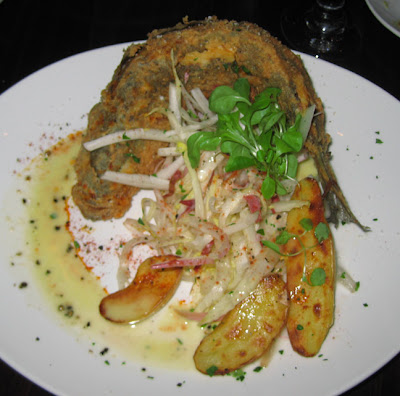 There were two striped bass dishes on the menu and MinxBro went for the crispy fried whole version. It was served with an endive salad and roasted fingerlings. It was rather awkward to wrestle with the fish, which curled during frying, but the meat was tender and not overcooked. The coating made it taste a bit like fried chicken. My brother seemed to enjoy it, but I felt it was pretty bland overall. 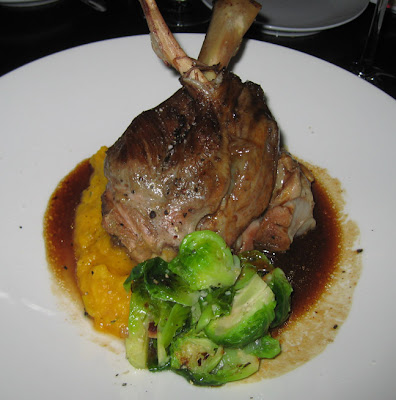 I had the Flintstonian-sized braised lamb shank with butternut squash mash and Brussels sprouts. The lamb tasted like someone's grandma cooked it - it was very homey, subtle, and soft as buttah. I would have preferred the mash to be chunkier and not hidden beneath the meat so much. An overall un-summer-like dish, but the barely cooked sprouts added a welcome green crunch. 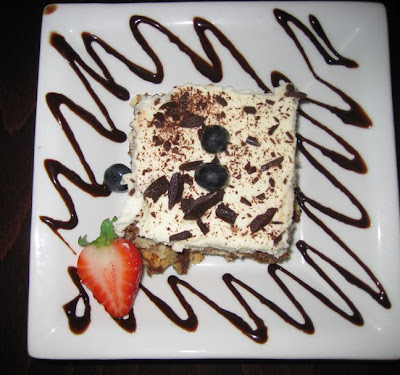 Dessert was the least successful part of the meal. The cake in Mr Minx's chocolate trifle was rather leaden... 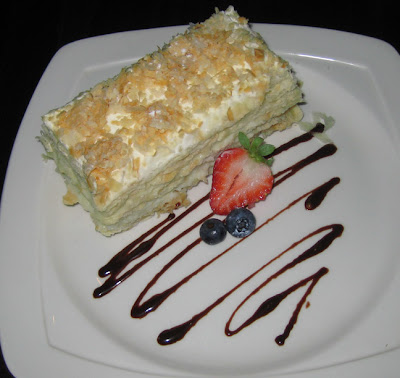 ...there was no lightness in MinxBro's vanilla napoleon... 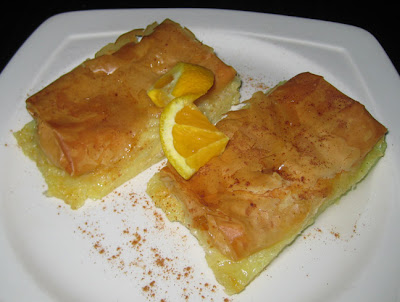 ...and my serving of galaktoboureko was huge. Ok, that's the worst thing I can say about it - I rather liked it, particularly the bite on which the orange had rested. However, it was too heavy a dessert after my entrée. My fault, I suppose.
Honestly though, the desserts were no better than those found in any Greek diner. They had a bit of commercial flavor, which was at odds with the homey-ness of the rest of the meal. And for a place that refers to itself as a patisserie. I expected much better, particularly after Elizabeth Large's initial Baltimore Sun review.
Overall, we enjoyed the meal and thought the atmosphere was pleasant. I'd go back again for a couple rounds of appetizers, and the lamb shank would make a perfect dinner for a blustery winter's night.
Meli
1636 Thames St
Baltimore, MD 21231
(410) 534-6354

Those are pretty decent pictures, what do you use to take the photos?

Thanks! I used a Canon powershot on the macro setting, with flash.