Still in Puerto Rico, Richard and Stephanie are forced to have breakfast with Lisa. It looks like they all order eggs Benedict, which Richard sniffs suspiciously, in case Lisa had the kitchen slip in some mind-altering chemical to make him drop out of the competition or something. 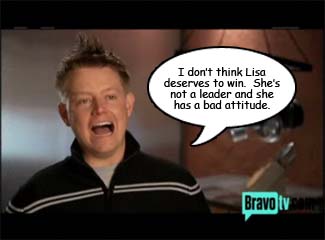 After breakfast, the cheftestants suit up and and head for the venue. 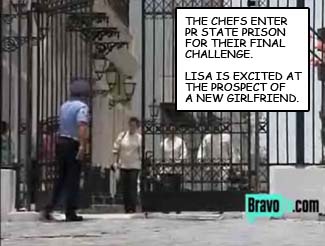 Actually, it looks to be the Governor's palace again. (Speaking of the Governor, ever wonder why we saw his wife in the last challenge, but not the man himself? Seems he's in a bit of hot water with the law: he's facing 19 counts, including conspiracy, making false statements, and wire fraud.)

Padma and Tom are there with three surprise guests standing behind tables laden with protein. Padma tells the chefs that they get to chose their sous chef based on the number of Elimination Challenges they've won. 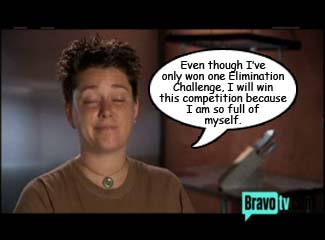 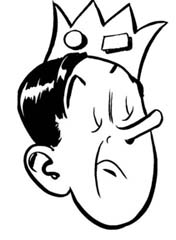 Richard and Stephanie are tied with four each, so they have to draw knives from the block one last time. The ever-gentlemanly Richard lets Stephanie pick first and she gets her choice of chefs. Who does she pick? 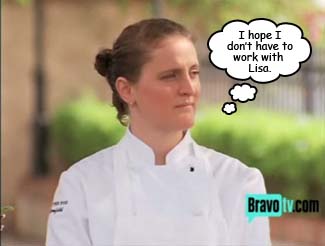 April Bloomfield of the Spotted Pig, 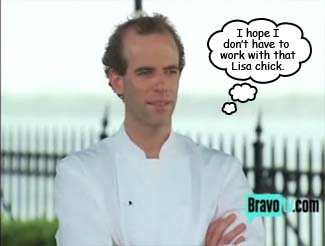 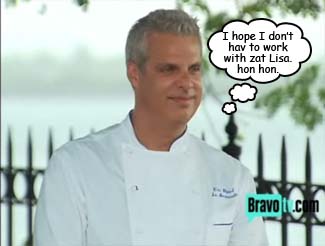 or Eric Ripert of Le Bernardin? Congratulations, Eric, you don't have to work with Lisa! Neither do you, Dan! BZZZZZ! Sorry, April. You lose.

The cheftestants have to pick their proteins from the selection that comes with their shiny new sous to create a four course progressive menu starting with a fish course, followed by poultry, meat, and dessert courses. We know from experience that Top Chef contestants are never happy when they have to make dessert.

For one, Lisa isn't too fond of cake. 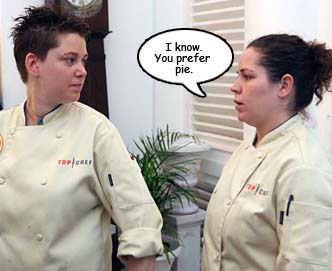 Richard isn't fazed by the dessert requirement. In fact, he brought a jug of liquid nitrogen with which to make ice cream. Bacon ice cream. And...banana scallops. Again. Hey, if it ain't broke, huh? Eric Ripert is fascinated by the display. Not every day one can show such an accomplished and world-famous chef something new. You go, Blais! 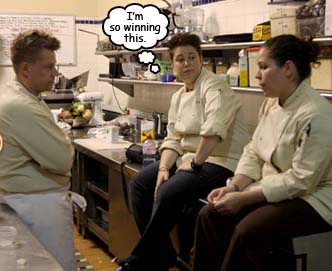 The bitch is pretty smug. She thinks if she cooks according to her personality, she's going to be successful. Yeah, 91% of Top Chef viewers found her completely indigestible. 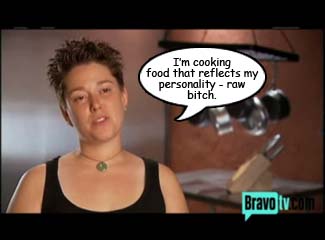 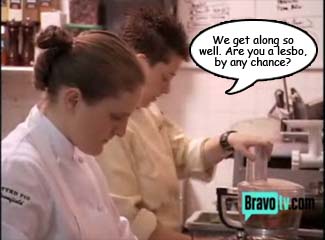 The cheftestants and their celebrity sous chefs commence to prepping their fancy meal for nine people. They get a generous three hours in which to get all of the preliminary work done. 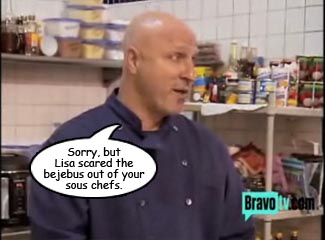 The next day, they come back to finish cooking and find that Eric, Dan, and April are not there. Tom comes in and tells them that this is the twist to the challenge - they have to finish cooking everything without the help of others. It's all about them this time.

The chefs get to work - they have four hours to get everything prepared and plated. Tom's Sniff 'n' Sneer reveals that Richard is excited. Stephanie is worried about her cake. Lisa is calm, cool, and collected as she plots world domination because she's damned sure she's going to be the first female Top Chef. 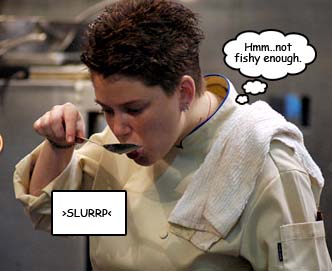 Then we see nine fancy guests filing into the the fancy dining room, wine glasses in hand (and probably half-soused). Look! It's Eric, April, and Dan! They can't stand to be in the kitchen with Lisa, but don't mind potential poisoning by her chow. Plus Gail AND Ted, Padma, Tom, and the godfather of new Puerto Rican cuisine Alfredo Ayala. Oh, and that fat Zagat dude who knows so little about food, he should have his own show on the Food Network. 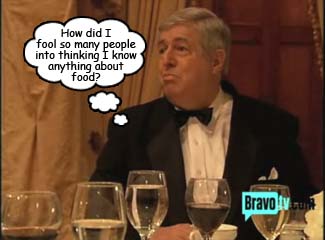 Beats the crap out of me. He wasn't too happy with Lisa's starter, shrimp in a spicy chile basil sauce. He wanted to "send it back to China," although it was pretty obviously a Southeast Asian-style dish. 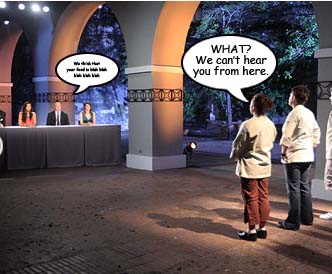 After presenting their food to the nine hungry diners, everyone goes to Judges' Table where the sweaty cheftestants are made to stand 157 yards away from the judges. Phew! 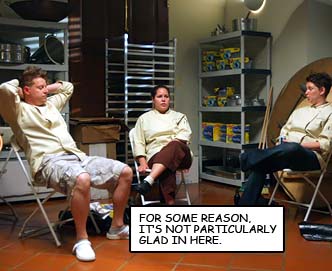 After a round of alternating critique and praise, they go to sit in the Glad and Evian Stew room to await their fates for the very last time. The judges contemplate the chef's dishes for a long time - Ted mentions that the morning birds are singing already at one point. 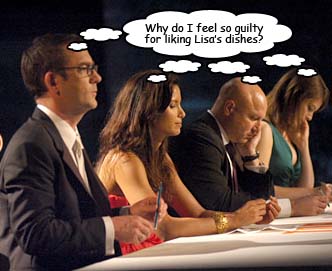 The judges weren't all that crazy about Richard's food, and he even admitted that he choked, which made me sad, since I wanted him to win. Surprisingly, Lisa had two successful dishes. 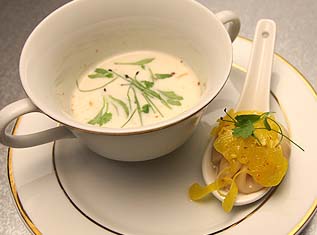 The judges enjoyed her soup and her dessert, and I think they even used the word "love." Such a strong word to use in regards to anything Lisa. Except maybe "bitch," but that would be appropriate.

Stephanie also had two good dishes, one of which was lamb medallions with maitake mushrooms, braised pistachios, blackberry gastrique, olives, and the kitchen sink. 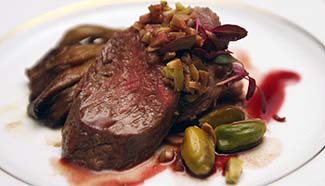 Eventually, the final three are brought out of sequesterment and stand in front of the judges. Again 796 feet away, because it's 5 hours later and they smell even worse. 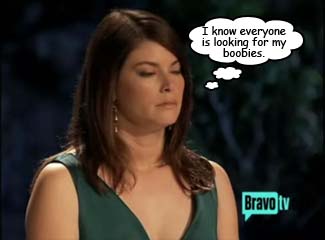 Didja notice that Gail wasn't so obviously boobaceous this week? 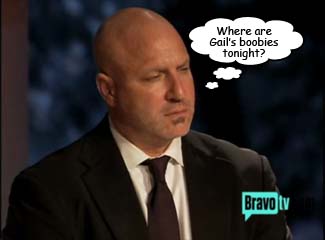 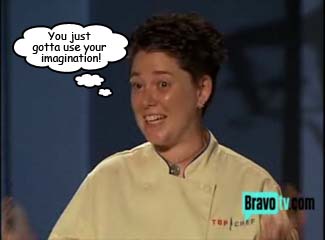 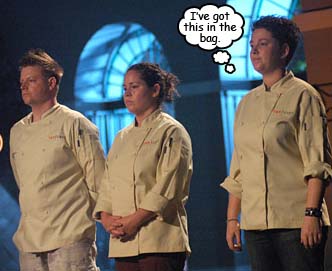 The judges tearfully admit that they did like Lisa's dishes, except for the steak, which sucked a little. Richard started to cry inside. Stephanie is worried that maybe they didn't like her as much. 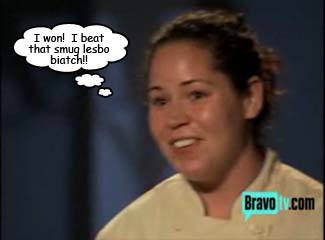 However, that fear was unfounded. Stephanie, you ARE the Top Chef! 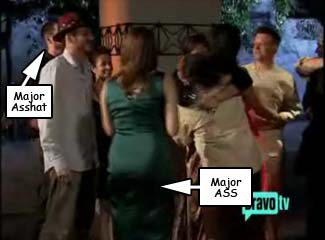 The other contestants who served as sous chefs in the Finale, Part One got to come out and congratulate the winner and recall how they are now truly losers. 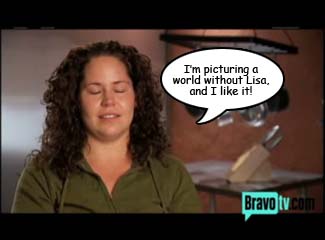 Just think - you'll never have to see her again! 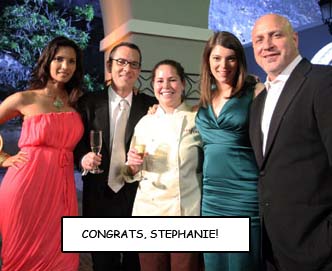 I wanted Richard to win, but hey, I'm ok with Steph taking the title. Because she's not Lisa. Also, she deserved it. Congrats!!
Posted by theminx

Gail's boobies have filed a formal complaint with the producers for not getting their fair share of airtime this week.

Jughead did love to eat.

Steph to Lisa:
'I know you prefer pie' LOL

"love." Such a strong word to use in regards to anything Lisa'' LOL

Do they really use the absurd pseudo-word "cheftestants" on that show? And even if they do, could you please not? Tortured English makes my eyes hurt.