The Polo Grill was Baltimore's dining hotspot in the Inn at the Colonnade for some fourteen years, all but two of which I spent living within walking distance. Yet I never managed to eat there, never got to order their famous fried lobster tail, or the blackened chicken pasta. In 2002, after years of success, owner Lenny Kaplan turned the restaurant over to his son-in-law, Rob Freeman, who renamed the place and basically ran it to ruin, allowing Aramark to take over in 2004.

Enter John and Todd Yuhanick, who together with experienced restaurateur Kehar Singh (Banjara, Ambassador Dining Room, Carlyle Club) took over the space and remade it last summer into the Spice Company. I had been wanting to eat there ever since, partly to make up for not having dined at the Polo Grill, and partly because I knew what Singh can do with a restaurant. 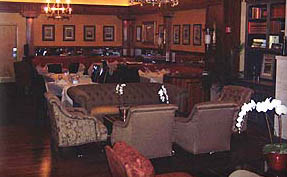 When I saw that they were participating in Restaurant Week, and offering an interesting menu, I knew this was the chance. So last night we entered the large dining room, decorated in warm and inviting tones, and had our post-Polo experience.

We were handed an extended version of the Restaurant Week menu that was available online, one that afforded us more choices. That only made our decision harder. I ended up choosing the Crab Lauren, followed by Roast Duck with Pomegranate Reduction. Hubby ordered the Duck and Mushroom Cannelloni, and something from the extended menu, Roast Pork Tenderloin with Sesame Noodles. We also chose a bottle of Temperanillo from the wine list, a medium-bodied red with low acid and nice fruit.

My Crab Lauren consisted of lumps of crab meat (the same kind sold as "backfin" in my local SuperFresh; I have no idea what variety of crab it comes from, but it's definitely not Blue crab, and it doesn't have much flavor) mounded over slices of avocado, and both sweet golden and earthy red beets. It was topped with a sprightly citrus herb vinagrette that did a lot to make the crab taste like something. DH remarked that the dish was suprisingly light and refreshing - perfect for the heatwave we find ourselves in. His appetizer consisted of two small homemade-tasting pasta cylinders filled with a rich and delicious mixture of duck meat and mushrooms, with some red-orange sauce on the side. We debated over whether it was tomato or red pepper, or a combination of both. It was very light, fresh and vegetal, and definitely not the roasted garlic aioli described on the online menu.

My entree featured more of that glorious roast duck. I received an ample portion of meat and crisp skin, glazed with a sweet sauce that did not have the tang of pomegranate. Rather, it was like the world's best plum sauce on a stellar Peking Duck. There were also some fruity pieces with the duck - apple slices perhaps? They had absorbed a lot of sauce and had become soft morsels bursting with flavor. On the side were some perfectly cooked (that is, the way I like 'em) green beans - still bright green, but very soft and a little charred, some forgettable rice, and a slice of acorn squash. After the lovely summery appetizer, this dish was all about Fall.

My husband's entree, too, reminded us of cooler weather. His pork tenderloin, closer to well-done than the medium he requested, was sauced with an orange glaze with a big hit of cinnamon, a lovely flavor combination with the tender pork. His sesame noodles were a much lighter, yet still very tasty, version than the one we routinely make at home, and he also received the green beans and squash.

For dessert, I chose the chocolate cake, but really wanted the pot de creme that my husband ordered. The cake was ok - a small slice of three layer cake with a rich chocolate ganache frosting and something moussey/buttercreamy between layers. Unfortunately, it was cold from the fridge, which probably wasn't the optimal temperature for enjoying the cake. The pot de creme was surprisingly coffee/mocha flavored, and of a far runnier texture than those I've had in the past. It was more like a fallen mousse. But it was rich, unctuous, and definitely delicious. We swapped plates halfway through, but I couldn't possibly finish the generous portion of creme.

We definitely got a good taste of Spice Company at a bargain price. The service was formal and attentive without being suffocating, and the atmosphere was overall pleasant, despite the somewhat loud and eclectic music coming from the bar area. My big gripe is the seating. The tablecloths are draped with several long layers of cloth that are uncomfortably heavy on one's lap, not to mention rather awkward to manipulate while trying to get oneself seated. (If I recall, we suffered the same tucked-into-bed-like fate at Carlyle Club.) We were seated at a small table with two overstuffed armchairs that were entirely too soft. Sinking into our seats made the table seem too high, and sitting up straight gave me a backache, since I had basically no support under my rump. Next time, I will request a table with the firmer-looking black chairs.

And yes, we'll definitely be going back. It will be good to have a special occasion restaurant closer to our neighborhood than downtown.