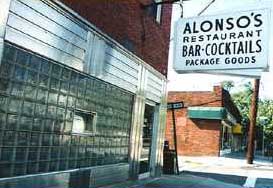 It's been quite a while since I've eaten at Alonso's, a neighborhood bar on Cold Spring Lane best known for its gigantic 1 and 1.5 pound hamburgers. On the occasions when my father would take me there when I was a little kid, we'd order one of their thin crust pizzas and either sit around the (then) horseshoe-shaped bar or at one of the booths. Now the Classic Restaurant Management Group owns it and the Tex-Mex place next door, Loco Hombre. They've been combined, mostly sharing one menu but two different vibes. Alonso's still has pizza, but the bar has been trimmed down, and the place doesn't quite seem as dark as it did in the past.

The two restaurants also share the Restaurant Week menu. Given the choice to sit in either restaurant, I chose the Alonso's side. I'm still smarting over the Loco Hombre dry tuna fiasco from a few years back, but the special three-course menu looked so appetizing, I thought it would be ok to give the kitchen another chance. There's no way the same grumpy chef was still cooking there.

After ordering a couple of beers (the deliciously malty Brewer's Art Resurrection for me) we decided on our dinner choices. I went for a seafood extravaganza - Pacific sea scallops wrapped in applewood smoked bacon with a cilantro chile-lime sauce, and the soft shell crab "haystack" served over a mix of spicy greens, topped with onion straws and Old Bay. My husband chose an all-meat menu of Southwestern chicken egg rolls and the roasted 9-oz NY strip steak with port wine mustard sauce, roasted garlic mashed potatoes, and sautéed green beans and onions.

First the appetizers. Mine consisted of two huge scallops, swaddled in smoky bacon. The bacon was a little undercooked, but the scallops were absolutely perfect, a bit translucent in the center and imbued with lovely bacon-y flavor. Marring the dish was the thin, pungently tart sauce that puddled around it and the small bits of diced tomato on the plate. It had no discernible cilantro or chile flavors. A light drizzle of aged balsamic might have been a better accompaniment. Hubby's eggrolls were practically an entree in themselves - two large fried cylinders filled with chicken, beans, and avocado scented with cumin were sliced on the diagonal and arranged around a small cup of what appeared to be melted jalapeno jelly. The filling was a little bland, but tasty, and helped by the sweet and spicy dipping sauce.

Before last November, when I took a taste of a friend's sandwich, I had never eaten soft crabs. Recently I liked them in a sushi roll. This time I was more daring and was rewarded with two crisp-fried crabs, cut in half and arranged body side-down on the plate, their legs pointing skyward splayed higgeldy-piggeldy. What an amazing thing, being able to eat a crustacean, carapace and all, right down to their crispy toes! The legs were tangled with pieces of crispy onion, and underneath it all was a small mound of cooked greens - collards perhaps (I had thought it would be a salad when I read the description). And to the side were small dollops of the most garlick-y mashed potatoes I've eaten in some time. There was a bit of white sauce on the plate too, probably thinned out sour cream or creme fraiche, with a scattering of tiny diced vegetables, to give the otherwise dark plate some color. It was an attractive presentation and the dish was delicious as well.

My husband's NY strip was nicely sized and cooked to perfectly medium-rare as requested. The sauce was flavorful but not overpowering, and he had generous portions of the garlic mashed potatoes and perfectly crisp petit haricot verts sautéed with lots of red onion. All were well-seasoned and the dish as a whole was well-thought-out. It's nice to eat dinner at a neighborhood joint and receive vegetable side dishes that aren't simply heated and plonked onto the plate, unsalted and unsauced, as if their existence was a requirement or a chore.

I was pretty full after the two courses and beer, but dessert was next. Ironically, DH and I had a conversation just the other night about how a Sandra Lee-type strawberry shortcake would involve one of those nasty artificially-yellow-colored cakes (that could do double-duty as Today Sponges) they sell near the strawberries in the supermarket, topped with berries and Cool Whip. Imagine my horror when that exact thing was placed in front of me at Alonso's. Well, perhaps not exactly that - the berries had been macerated in lemon juice, and the resulting sauce completely saturated the cake. Maybe it was store bought, maybe it was home-made, I couldn't tell by the flavor (but it was sized and shaped exactly like those spongy monstrosities). The swirl of cream on top was oddly thick, thicker than real whipped cream, and it did have a mild flavor of extruded plastic. It was almost as if Cool Whip made a gourmet full-fat version of whipped topping.

Hub's dessert was an echo of his appetizer - 2 deep-fried banana spring rolls, cut in half on the bias and arranged around a scoop of chocolate chip ice cream and drizzled with caramel sauce. Home-made, grainy, buttery caramel sauce. Swoon! What a nice combination of fruit and sweetness. The bananas were at the perfect slightly-green ripeness for this dish, and the ice cream melted into a delicious sauce. Not surprisingly, he didn't want to trade with me. But he did share generously (as did I).

Overall, it was a pretty good experience, I'd say. Definitely worth trying again.