Another Reason to Hate Rachael Ray

...and the Food Network doesn't score too well in this one either.

On a recent episode of RR's Tasty Travels, perky Ms Ray extolled the virtues of Faidley's crab cakes. The images shown on the screen at this time were of a fried hockey puck with a pale golden color and somewhat sandy texture, and of Nancy Devine strenuously beating a smooth mixture in a large bowl. Ms Ray's voiceover then continued on to the Baltimore tradition of coddies, while the video displayed large, lumpy, dark golden brown blobs studded with white lumps.

Can't tell the difference between a crab cake and a coddie, eh, Rachey? Let me help you a bit then. 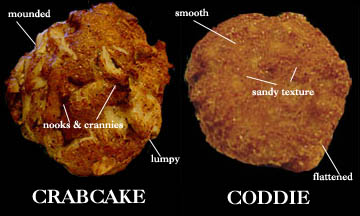 These are actual samples of a crabcake and a coddie from Faidley's. On the left, we see a lovely specimen of Crabcake, lumpy with snowy white hunks of backfin, lovingly and gently (so as not to break up the crab lumps) formed into a large mound, and fried until a deep golden brown. On the right, we see a Coddie, fairly smooth-textured because it's made from cod flakes and mashed potato, and flattened so it fits nicely between two saltines.

I realize that Ms. Ray probably never ran the gauntlet of drug dealers outside Lexington Market to set foot into Faidley's, so she never got to see the crabcakes and coddies in person. But the idiots from Food Network sure did. Do they think the viewing public is so naive to believe when she speaks of food as if she is familiar with it, she actually is? Unfortunately, most of her viewers are that naive. And now millions of them, taken in by her cutesy proclamations of "yum-o!" are just as confused as she is. 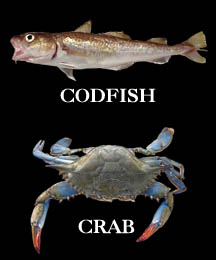 Now, maybe she did the voice over bit blindly, without seeing the footage, and had no idea that the editing would make her sound stupid to food-savvy Marylanders. But if my name were on the masthead of the show, I'd damn well want to view a final cut before the pulic got to see it. And shouldn't the Food Network employ some sort of fact checkers, to confirm the veracity of statements being made on their programs?

Or am I just expecting too much from a network whose idea of entertainment is sending various individuals around the country to taste restaurant food?
Posted by theminx

hey, I just got a free $500.00 Gift Card. you can redeem yours at Abercrombie & Fitch All you have to do to get yours is Click Here to get a $500 free gift card for your backtoschool wardrobe