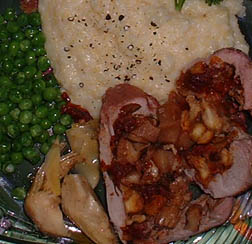 When you hears the word "stuffing," you usually thinks of Thanksgiving turkey, right? But as long as you have a starch, a fat, and seasonings, you can make stuffing.

I decided that I was going to make pork tenderloins for dinner tonight. Ordinarily, I would rub them with some spices, Patak's biryani paste, for example, and bake them. But today I decided I wanted to stuff them. I had never butterflied a pork tenderloin before and wasn't even sure it could be done successfully, but once I get an idea in my head, it's hard to change my mind.

So now that I had decided to stuff my pork, the question became - what with? I opened my magic pantry and discovered some sundried tomatoes. What else did I have? Hmmm...there's a can of abalone mushrooms purchased from the Asian food store a couple weeks ago...and some walnut halves...and there are two slightly stale hot dog rolls...and some chopped frozen onions! That sounds like stuffing to me!

Add frozen onions to a skillet and salt generously. When they have thawed, add a splash of olive oil, the sundried tomatoes, and mushrooms. Sautee for 10 minutes, until browned and fragrant and all moisture has evaporated. Stir in garlic and cook for an additional 2 minutes. Taste for seasoning. I found the mixture to be a bit bland, so added approximately 1 teaspoon of balsamic vinegar and a generous drizzle of honey. This made for a nice flavor balance. Toss in parsley, crumbled bread and water, stirring until bread is most. Remove stuffing to a bowl; cover and chill until cool.

I cut my pork tenderloins in half widthwise because I wasn't sure if I had a knife long enough to butterfly them whole, then cut each piece into a wide strip. When the stuffing was cool, I mixed in the walnut pieces. I then mounded the mixture onto the pork and topped the stuffing with slices of hard goat cheese. After rolling up the meat into fat logs, I secured them with wooden skewers, placed them on a foil-lined baking sheet, and drizzled them with olive oil and salt and pepper.

In the meantime, since I was doing something vaguely Italianate with the pork, I decided to make a side dish of polenta. I had some medium-ground cornmeal, and some grits.

Bring water to a boil. Slowly stir in the cornmeal and grits. Stir continuously, on medium heat, until the mixture thickens and starts to pull away from the sides of the pan, about 20 minutes. Stir in the butter, salt and pepper, and grated cheese.

For a green veg, I nuked some frozen peas in salted water for 4 minutes, drained them, then added a knob of butter. Easy peasy. :)

The stuffing was rich and mellow, and went well with the somewhat bland pork. I think it would also work well for chicken breasts, or perhaps some turkey tenderloins as well. Heck - beef too! The stuffing was also quite moist (but not at all wet) and precluded the need for any sauce or gravy. The "polenta" was flavorful, but not too dense, and the peas were a nice touch of green. Although a simply dressed arugula or other green salad would be quite appropriate as well.

The stuffing could have been made with any number of ingredients - perhaps chopped dried apricots and prunes instead of the tomatoes, or even dried cherries or cranberries. Pecans could have substituted for the walnuts; no nuts at all would have also been fine. Fresh basil would have been a welcome touch, but that will have to wait a few months until I can get my container garden started. And I could easily have substituted pre-cooked rice for the stale rolls, or maybe that last piece of cornbread hanging out in the fridge.

Stuffing doesn't have to be just for Thanksgiving, and doesn't have to come out of a box, either. If you have the the right ingredients on hand - and "right" is pretty limitless - you can stuff just about anything.
Posted by theminx