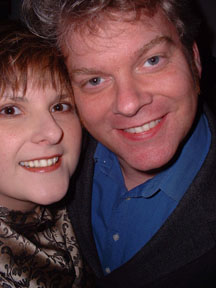 This charming portrait of moi and my lovely husband was taken 16 days ago. Yes, on New Year's Eve. I know I am very behind in my blogetry, so please be patient and eventually I will catch up with myself.

The day after our Tribeca Grill adventure on 12/27, we had another wonderful meal at Jesse Wong's Hong Kong, in Columbia, MD. That's our usual dim sum spot, and now it's our favorite non-delivery/carry-out Chinese restaurant. So that makes two really rich meals in the week after Christmas (not counting the pasta extravaganza of Christmas day)...and NYE was going to be our third. By that time, I was starting to feel pretty logy and was ready for Neal's soup Nazi diet to start up again...but first, the decadence of our last meal of 2005.

We had originally wanted to eat at Ixia, the high-end posh place that took over the space where the late, lamented Louie's the Bookstore Cafe used to be. We had eaten at Ixia a few times before and were delighted by their Asian/Mediterranean/Modern American fusion cuisine. Our last visit was for my birthday, 2004, and we thought a year was too long a time to pass before our next visit. When I called to make our reservations, the dude who answered requested my fax or e-mail address, as he needed to "send some forms." An hour or so later, the e-mailed forms turned out to be for credit card authorization. Seems that there was a $25 charge per person for uncancelled no-show reservations. Hey, I appreciate that, and have no problem with giving my card number to a restaurant. Over the phone. Faxing or e-mailing my number is a tad unsecure. So I called back.

"Hey, I'm not comfortable with giving my phone number via e-mail. Can I just give it to you over the phone."
"I understand your concern," Ixia-dude said, "but it's our policy to get a fax or e-mail confirmation. Other folks have faxed their information and we keep it in our safe."
"Um, no, that doesn't make me feel better. I'm sorry, but why can't you take my credit card number over the phone? I've made reservations at several high-end places in New York and Las Vegas and have never had this issue."
"Well, we need your signature." was Ixia-dude's reply.
"Um, how do you expect me to sign an e-mail?"
Ixia-dude went silent. "Well, can you come in and sign the form?"
"No thanks...we'll just go elsewhere!"

So we made a reservation at Roy's, possibly our all-time favorite upscale restaurant. We've gone there for birthdays, anniversaries, New Year's Eve, and Just Because. Roy's is an "upscale restaurant group" (these places don't like to be called "chains") with locations in 11 states serving Hawaiian fusion cuisine. The Baltimore location, at Inner Harbor East, is decorated in warm orange and yellow hues, with an open kitchen, friendly staff, and a menu that makes me drool just thinking about it.

The New Year's Eve 2005 menu was a four-course prix fixe, price determined by the entree chosen. Each category had a few choices and it was somewhat difficult to decide what we wanted to eat. Interestingly enough, I went for complete and utter decadence, while Neal's selections were on the lighter side.

For starters, I went for the foie gras confit, served with a blackberry ginger jam; Neal was daring and tried the lamb carpaccio with balsamic drizzle and eggplant chutney. The foie gras was cold, something I had never tried before, and was like the world's best braunschweiger (I love braunschweiger, so that's a good thing), very mild but firm-textured. The blackberry jam was thick and not too sweet (the kitchen thoughtfully had strained out the seeds -- a nice touch), and was actually a very nice compliment to the foie. The two tiny toasts were not enough to accomodate the generous portion of foie, so I supplemented it with my sourdough roll. I was tempted to break the roll open, slide in the foie, and eat it like a really naughty sandwich.

Neal's carpaccio, tiny slices of raw lamb, about an inch square and paper thin, were arranged side by side on a long narrow plate, with a dollop of eggplant at the center and artful drizzles of balsamic reduction and puddles of cilantro oil. The flavors were simple yet complex: the combination of lamb and cilantro, fairly pure in themselves, exploded on the tongue in combination, and the eggplant chutney was fresh and firm, with subtle Indian flavors.

Our second course was soup or salad, and Neal went for the salad of baby greens with a bbq pork wonton crisp, and I had the oyster stew. The salad was, as expected, fresh and green, and the wonton crisp - wow. The filling of shredded Chinese bbq pork was scrumptious, and I am luck enough to have a husband who will periodically pull out shreds of meat and place them lovingly on my bread plate. Of course I shared a bit of my oyster stew with him as well. It was a large portion, served in a shallow but wide bowl. The stew was chunky with bacon, potatoes, fresh corn that was still crisp, three whole fried oysters, and a few cubes of jalapeno corn bread. Comfort food at its finest. If only the soup Nazi can concoct that at home....

By the time the entrees arrived, I was full. But I pressed on. I had the maple-glazed duck with porcini risotto. I swear they were trying to kill me with the portion sizes, as I received almost half a duck (leg, thigh, wing, and partial breast). The skin was crisp, with a bit of fat underneath, and the meat was tender and flavorful. The risotto was a bit firm for my tastes, but delicious, as were the accompanying asparagus spears, cippoline onion, and tiny charred sweet peppers. Neal went with the applewood smoked bacon-encrusted shutome (shoo-toe-may) and fennel gnocci. Shutome, or Hawaiian broadbill swordfish, is a meaty, firm, white fish that absorbed so much of the bacon flavoring, it was hard to tell it was actually fish and not some other heavenly creature. And the gnocchi were feather light and subtly-flavored.

By dessert time, we were fairly bursting with food, but I had wisely doggie-bagged most of my duck. I had the white chocolate chestnut mousse, and Neal went for the green tea tiramisu. He was a bit disappointed, as there wasn't much green tea flavor at all, but the creamy texture was very nice. My mousse was served as a little confection, with a circle of white cake topped with white chocolate mousse and glazed with chocolate. Perched on top, nipplelike, was a candied chestnut, and chopped chestnut pieces and their syrup were scattered about. On the side was a demitasse cup filled with the most delicious hot chocolate I have ever experienced. In fact, despite all of the other amazing things we had during the meal, it was the high point. The drink was warm and malty and chocolately and reminded me of a cup of Horlicks, my favorite bedtime drink when visiting the U.K. Perched atop the rim of the cup was a tiny spoon-shaped cookie, too precious to imagine, which unfortunately fell into the cup and dissolved when my clumsy fingers attempted to pick it up.

I was still worried about my potential grape allergy, so our beverage for this meal was Roy's Hawaiian martini -- vodka and pineapple juice with a huge chunk of vodka-soaked pineapple that we saved for the very last.

What a nice way to end 2005. Let's hope 2006 presents many more opportunties for fine dining.
Posted by theminx