Is it me, or was this episode a little lackluster? Boring, even? Must be me, huh? After all, I've just spent the last four weeks sitting at home, telecommuting from my dining room table, eating at my dining table, fooling around on Facebook at my dining room table. And currently I am writing this, you guessed it, at my dining room table. Life has so much sameness now from day to day. The only way I could think of mixing it up was to spend some nights on the living room couch, reading, rather than on the basement couch, watching TV.

Last night was a basement-TV watching night. We watched four episodes of Grace & Frankie before Top Chef came on. And honestly - G&F is so much more entertaining. And last night maybe a little exciting, but not in a good way. With two minutes or so left in episode 2 of season 6, the scene with Jane Fonda (Grace) sitting on the toilet, our internet decides to crap out on us. So to speak. Top Chef was starting in less than 10 minutes, and Mr Minx had to run upstairs to restart the modem so we could find out if Grace had a UTI or just needed Metamucil. (We jettisoned the unnecessarily expensive Comcast and switched to YouTube TV last month.) By the time the internet started to cooperate again, Top Chef had begun. When we came in, the cheftestants were busy cooking various colorful things and Kelly Clarkson was hanging out with Padma. We never did find out what was going on with Grace. 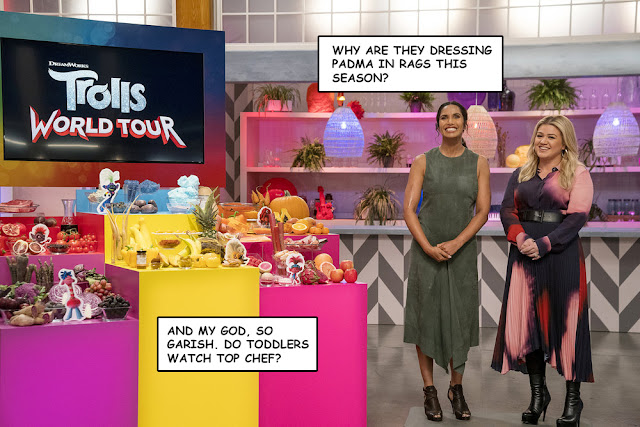 Apparently we had missed opening scenes in the mansion with Nini, Karen, and Stephanie doing Charlie's Angels poses as "Padma's Angels." Oookay. Personally, I'd rather be one of Bryan Voltaggio's Angels. Let's leave it at that.

We also missed the crux of the Quickfire Challenge, which was to create a harmonious dish using one ingredient each in these colors: red, purple, blue, yellow, orange, and pink. No such thing as blue food, you say? (C'mon, blueberries are really purple.) Then how about blue cotton candy? Ok, while that's not an actual food, it was available for use on the wild multicolored unicorn-barf-themed display. What? it's not unicorn-barf-themed? It's Trolls themed? Ok. Apparently the whole challenge is a tie-in for the upcoming Trolls World Tour movie. Kelly Clarkson is doing one of the character voices, so that explains her presence. What it doesn't explain is why someone thought it was a good idea to resurrect Trolls, those hideous little crazy-haired dolls of my youth. They were ugly then. Justin Timberlake's voice work doesn't make them more attractive now.

Geez. I am full of rants today. (What else is new?)

Anyhoo...on to the challenge. When our Internet finally kicked back in, the cheftestants were plating their rainbow dishes to serve to Padma and Kelly. Kelly claimed to like everything, but then she seems like someone who enjoys food. The poor girl's weight has fluctuated for years, and at this point she's on the chunky side. As long as she is in good health, she should skip the yo-yo dieting and enjoy life. And food. The dishes that she and Padma enjoyed most were Gregory's golden yellow squash soup, Lisa's steak, and Karen's beef tartare with pomegranate, which had an enjoyable crunch. On the bottom were Stephanie's rainbow rice rolls with a peanut blue sugar dipping sauce that was too sweet, Nini's tough seared purple potato gnocchi, and my boyfriend's shrimp ceviche. Bryan looked gobsmacked at being on the bottom.Though I'll be honest with you, from the quick glimpse of the dish I saw on the screen, the shrimp looked raw. Which would explain why Kelly felt they were "mushy." Sorry Bryan! The winning dish was Gregory's soup, and for his endeavors, he received not only immunity in the next challenge, but also two tickets to the premiere of Trolls World Tour. When asked who he would take with him, he indicated that it would be Nini. She had lent him a can opener during the challenge and she made him promise to take her if he won. He pinky swore he would, and you know that's a binding agreement if there ever was one.

Too bad they'll be watching the movie from the comfort of their own couches. Not even together, unless they happen to live in the same house. Fuck covid-19 and fuck social distancing and fuck everything else, too. 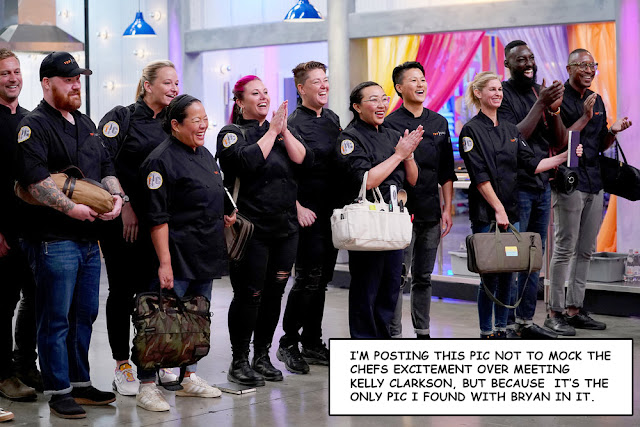 Padma then introduces the Elimination Challenge, which will involve the famed Santa Monica Farmers' Market. After drawing knives that put them in two teams, the cheftestants are told that they will receive $1200 to shop for ingredients to create a 6-course progressive menu, with each chef responsible for one course. They'll then cook and serve a full house at Chef Jeremy Fox's restaurant, Birdie G's, in Santa Monica. Oh yeah, and the menu has to be totally vegetarian. Some chefs actually seem enthused, others are probably more "WTF," but we don't get to see their reactions.

Back at the Top Chef Mansion, they find a basket of ugly Troll merch from Kelly, which they idiotically put on their heads for the camera. Karen then calls her spouse, LJ. I hate when they have competitors call their significant others. Sometimes it's part of a loser edit. In this case, I think not. (That's more of a Project Runway trope.) Still. And any screen time given to a cheftestant other than Bryan is a waste of my time.

The next day, the cheftestants hit the farmers' market to buy their ingredients. They've already decided who is cooking what, of course. I feel that the Red Team's (Malarky, Bryan, Nini, Lee Anne, Lisa, Stephanie) dishes seem like a list of raw ingredients, while the Blue Team's (Eric, Gregory, Jenn, Kevin, Karen, Melanie) seem more like composed dishes. Also, apart from Bryan, it seems that the Blue Team has the stronger chefs. They think so, too.

Back to the market: Bryan intended to do something with mushrooms, but the mushroom man was out that day. Bastard! My BF switches gears to beets and sprouted legumes. Lee Anne is buying all the veg for her crudite. Gregory tells us that he's been sober 11 years and is into health and superfoods. Malarkey says he's going to try something new by going super simple and restrained with his dish rather than his usual vadouvan-coated melange of 20 different elements. Nini is confident in her dessert-making skills. Lee Anne is buying even more veg.

I'm not sure how they fit all 12 chefs in what appears to be a fairly small kitchen, but it happened. 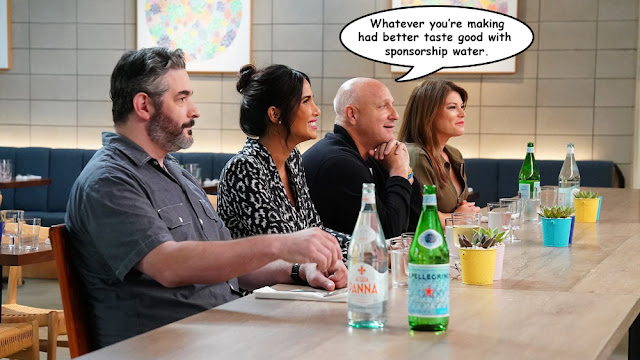 This week, there are about a third of the judges/eaters as in past weeks, just the holy trinity of Padma, Gail, and Tom, plus Jeremy Fox. They sit at the counter and wait for their dishes to start arriving. Though the chefs aren't competing head-to-head, the courses are presented that way. First up is Malarkey's very basic burrata and raw tomato dish and Kevin's fancier tomato and melon with avocado tofu, fresh dates, and "California" togarashi. The judges prefer Kevin's, which, of course they do.

The second course is Blue Team Melissa's coconut corn soup with pickled garlic chives and puffed grains vs Lee Anne's butternut squash hummus, goat feta, and an entire market worth of crudite. Lee Anne was running out of time (because once again her dish had too much shit going on) so Malarkey helped to add olive oil and salt to her dish. Her hummus seemed bland, and the judges preferred Melissa's soup.

Blue Team Karen handmade trofie pasta with mint pistachio pesto, fava greens, pea shoots, and asparagus. Red Team Lisa made chili soy brussels sprouts with apples and pistachio. It sounded good, but the sprouts were not cooked in the middle, dried out, and cold to boot. Karen's pasta was "Spring on a plate," and very veg-forward. Karen's point.

Surprisingly, the judges actually liked Red Stephanie's cauliflower with quinoa and spiced piri piri sauce. She doesn't seem to fare very well most weeks. They judges also liked Gregory's grilled carrots, charred scallion coconut yogurt, and charred kale oil. I love carrots, and that dish sound amazing to me. Gotta try making something like that myself. Maybe now, while there's nothing better to do than sit at my dining room table and work or play on the internet or wish I was anywhere else in the world as long as I didn't need a mask and rubber gloves.

Red Bryan's smoked beet, sprouted legumes and grains, vegetable demi, pea tendrils, and watercress gets rave reviews. But they also like Blue Jenn's jerk cauliflower with cashew sauce, broccoli flowers, and grapes. Her original sauce had burnt, but she managed to pull off a new one without sacrificing the quality of the dish.

Judges' Table: The Blue Team was the clear winner to both the judges and to me. Jeremy liked Melissa's corn and coconut soup the best, and she was declared the winner for the second week in a row. Red Team's Lee Anne was criticized for not using enough seasoning. She and Malarkey take turns throwing each other under a moving multi-passenger vehicle over who salted what on her plate. When Malarkey points out that the judges felt her hummus was underseasoned, too, Lee Anne is pissed. Malarkey is taken to task for his own too-simple dish, which might have been better had he used a roasted tomato element as well. Lisa's brussels sprouts were considered to be "clunky" though she insists they were "rustic." Though I was hoping for Malarkey's release, it was Lisa that was sent home. Cuz she's pretty low-drama. And we need the drama.

Next week: the cheftestants' loved ones show up to describe dishes to the chefs so they can cook them by remote instruction. This challenge sounds suspiciously like Food Network's Worst Cooks in America's "Remote Control Chef." Will it be more entertaining? We'll see... but only if our Internet doesn't crap out on us again.