This post originally appeared on Minxeats.com on November 19, 2009.  You should go read the comments on the original post. Yes! This was back when I still did get comments!

On our penultimate morning at the McMansion, we find that Bryan is worried about money, since his fledgling restaurant's business is slowing while he's been gone. Kevin is missing his wife. And he must be a big fan of 80s Madonna, because we see him put a rosary on like a necklace and tuck it under his chef's whites (thankfully we were spared the scene of him putting on ripped fishnets). Eli mentions that season 4 finalist Richard Blais was his mentor and he wants to win the big prize for the both of them. I can just hear the conversation now:

Jen, as usual, is feeling the pressure but hopes she can perform better in the day's challenges.

On to the M Resort where the five remaining cheftestants find Padma with a rather elf-like creature. 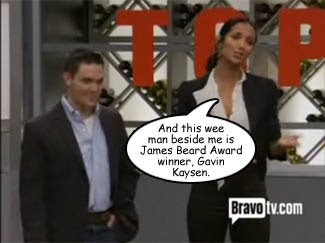 Not only did Wee Gavin win a Beard Award but he also represented the U.S. in the prestigious Bocuse d'Or competition in 2007. Yet he was beat out in the Next Iron Chef competition by Michael Symon. Go figure. Anyhoo, Wee Gavin talks about creating a ballotine of chicken with a crayfish center for the Bocuse. What he doesn't mention is the Tale of the Dishwasher. One of the side dishes for Wee Gavin's platter involved chicken wings. His hungry (and possibly stupid) dishwasher saw the wings, thought they were reject parts, and ate them. The result: Wee Gavin came in 14th. So the next time you scoff at the dish of butter-and-hot-sauce-soaked yumminess that is Buffalo wings, remember just how crucial they can be in a competitive situation.

Back to the Quickfire Challenge you say? 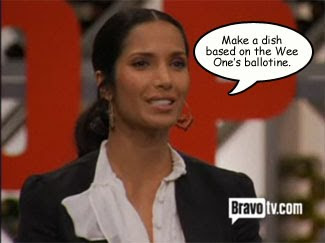 But wait - what's a ballotine? 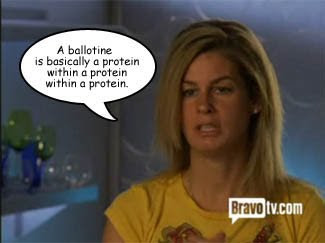 I know there's a dirty joke in there somewhere.

There is no immunity, but the winner of this challenge will receive a significant advantage in the Elimination challenge.

Bryan is pretty confident, since he's made ballotines before, and is planning one with merguez sausage and lamb. His brother is even more confident and decides the contest isn't about ballotines at all but about combining three proteins, so he's making a compressed terrine. Meanwhile, Kevin thinks they're both a little dumb to try something so risky in a short 90 minutes.

Jen jokes about making a turducken, but switches to what she knows best - seafood. And Eli does his own thing too. 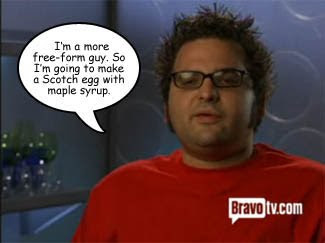 Obviously Top Chef Masters had not aired by the time this episode was filmed, otherwise Eli would have seen how successful Chef Art Smith was with his Scotch Egg. Not.

Time's up! Padma and Wee Gavin go around and taste everyone's wares. Bryan's dish was complimented; Kevin's breaded catfish dish may not have been risky, but it was dry. Wee Gavin actually did like Eli's egg. He wasn't crazy about Michael's terrine, as it was a terrine and not a ballotine-style preparation. 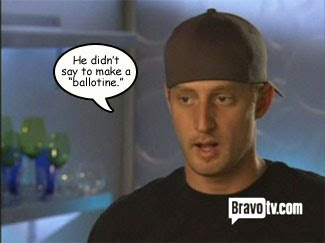 Apparently his ego was so puffed up, it clogged his ears or something. 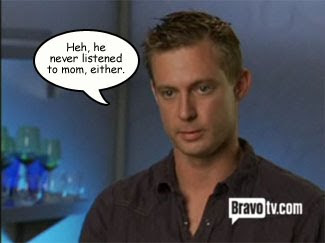 Wee Gavin loved Jen's calamari with scallops and salmon and proclaimed her the winner, to loud sighs of relief from both Jen and the many viewers who have been pulling for her to make a comeback. Way to go, Jen!

No time to celebrate, next up is the Elimination Challenge which will be a Top Chef-ified version of the Bocuse d'Or. Let's call it "L'Excuse du Jour." Each chef must create a single protein dish and two fancy garnishes and plate them all on those silly mirrors (I think they're used so the puffed-up judges have something in which to admire themselves). They have the choice of salmon or lamb and the rest is up to them. They will have four hours to cook at Alex Stratta's restaurant Alex at the Wynn. Because she won the Quickfire, Jen gets the advantage of an additional 30 minutes to cook. The cheftestants will be judged by a party of 12, some of whom are reps from the American Advisory Board for the Bocuse d'Or, one of which is the illustrious Thomas Keller. None of which is Toby Young.

The cheftestants then pile into Sponsormobiles and head to Whole Paycheck for the obligatory shopping scene.

Back at the McMansion, we find Bryan shoveling Alexia Crunchy Snacks into his mouth while they all stare glassy-eyed at videos of Bocuse d'Or competitions. Michael has gone straight to bed, still in his chef's whites (hygiene is important in the kitchen but apparently not in the bedroom). Kevin asks Bryan about cooking sous vide, and Bryan explains the technique. 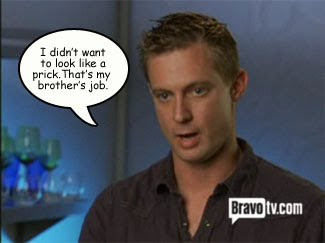 The next day, the chefs settle in at the Alex kitchen. Tom comes in with Thomas Keller to give the chefs a pep talk. 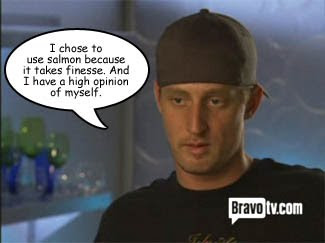 He also takes the opportunity to trash talk Kevin. 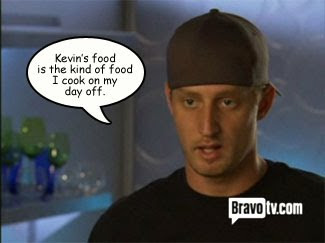 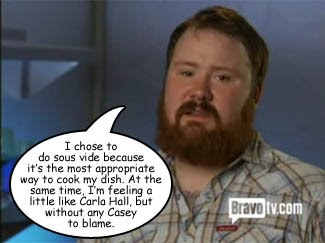 Tom ditches Keller and comes back for his Sniff 'n' Sneer. He gives Kevin funny looks when he sees his immersion circulator. As if leprechauns aren't allowed to use technology and must rely on their elfin magic! 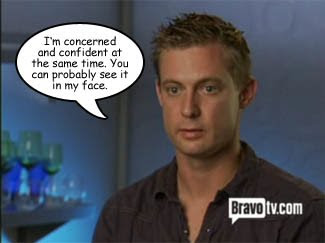 Tom decides to throw a monkey wrench into the proceedings. Or does he? 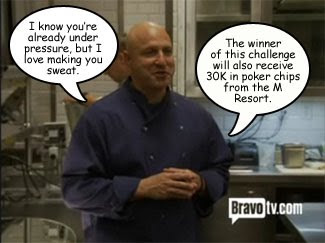 Guess who finds this funny? "Hahahahahaha."

We then cut to a schmancy dining room where the guests are arriving. They include Padma, Gail, Tom, Thomas Keller, Wee Gavin, Traci des Jardins (who also won a James Beard Award but lost the title of Next Iron Chef), Alex Stratta, Daniel Boulud, Jerome Bocuse (son of Paul), and Timothy Hollingsworth, the French Laundry sous chef who represented the U.S. in the Bocuse d'Or in 2009.

Kevin's shiny mirrored platter comes out first, bearing Poached Lamb Loin, Sherry-Glazed Beet, and Asparagus in Sunchoke Cream. While they seem to enjoy the flavors, Keller says the dish seemed a bit "elemental" for the length of time and the caliber of chef.

Michael is next with his Salmon with Cauliflower Chickpea Tart and Zucchini Tzatziki. He calls it "Mediterranean" but that was declared a misnomer by most of the judges. And then Alex Stratta found a bone in his fish, which seemed to concern Padma more than most. 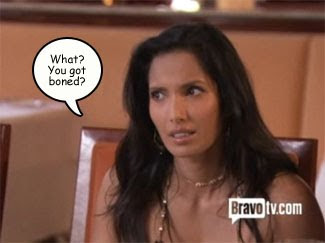 Bryan was next with Crusted Lamb Loin, Lamb Shank Crepinette, and Orzo Au Gratin. Bocuse liked the presentation but the lamb was undercooked and tough. 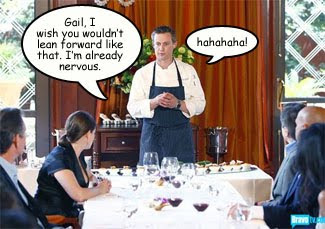 Eli's Sausage-wrapped Lamb Loin, Carrot Puree, and Tomato-Piquillo Canapé came out next. His lamb was seriously undercooked with unpleasant bits of raw fat. His meat was also sliced unevenly. Padma liked the flavors, and the judges agreed that the idea was good but the technical production was a failure.

Finally we have Jen's Salmon and Caviar, Shrimp Flan and Truffle, and Celery Root and Shiitake. The flavors and presentation were nice, but not well thought-out. And the salmon was unevenly cooked.

After the judges finish eating, the cheftestants were brought back out to face the diners. Gail said she was proud that they could produce the food they did with only 12 hours to shop, plan, and cook. After a round of applause, the chefs were told that the winner of this Elimination Challenge would be allowed to compete for a spot on the 2011 Bocuse d'Or team.

The chefs are then herded to the Glad Family of Products Stew and Booze Room where we get our fakeout scene which is all ooey-gooey with emotion. Bryan says they should be proud because they cooked for the best chefs in the world! And Tyler Florence. Jen says at the end of the day, even though they are competitors, they are all friends. Awwww. /fakeout 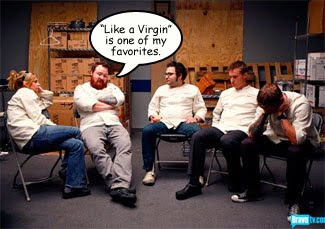 Padma comes in, far perkier than in any prior episode, to call *all* of the chefs to Judges' Table. Wee Gavin has been replaced by Jerome Bocuse for the occasion. The chefs were alternately complimented and castigated for their dishes and then sent back to stew. It seemed to me that none of the judges exactly agreed with each other, so this was going to be a tough elimination.

Finally, the cheftestants were brought out again. Tom told them he had incredible respect for all of them - but one of them had to go. First - the winner. Despite complaints about the over-simplicity of his dish, Kevin's lamb was perfectly cooked. He was given the 30K in poker chips, plus a Bocuse d'Or jacket and some reference materials he might need if he wanted to compete for a position on the 2011 team.

After Kevin leaves the room, they again tell the remaining chefs their shortcomings. 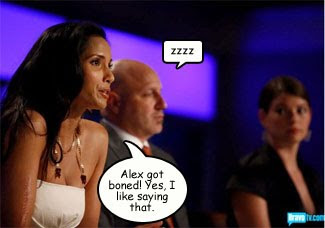 Not only was there a bone in Michael's fish, but his cucumber wasn't impressive. Now that should knock his ego down a few pegs!

Then Padma said the magic words, which this week included the name "Eli." He managed not to cry and snivel too much on his way out the door to be briefly reunited with his ladylove, Robin (who no doubt was already fighting off the attentions of DoucheyMike). 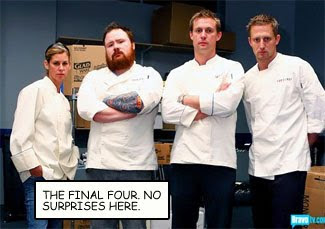 Next week: the Final Four do battle in wine country!