2019 was not a good year for me. Even food-wise, I think it was a bit lackluster. Not for trying though...Mr Minx and I ate most Saturday dinners in one or another of our favorite restaurants. Though we had lots of good food, little of it was truly impressive.

Rather than go through posts by month, I'm grouping these by area. The first few items were eaten in New York, and the rest in the Baltimore area. 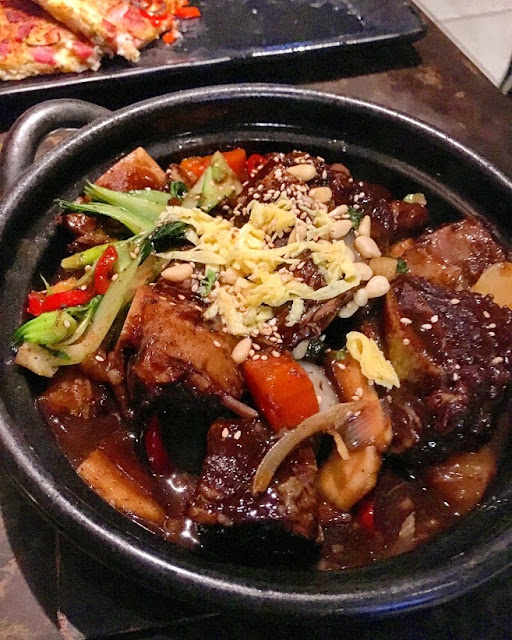 I love Korean galbi (thinly sliced bone-in short rib, marinated and grilled) and was surprised by the version served at Samwon Garden in NY. Rather than the somewhat chewy Korean-style cut, these ribs were western style and had been braised to fork-tenderness. So delicious. 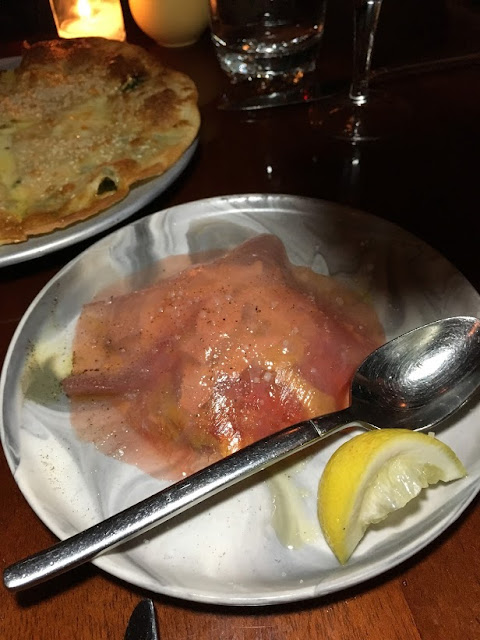 Pretty much everything we ate at Don Angie was great, but my favorite dish was the tonnato vitello, a cold dish of spicy veal tartare flavored with bits of celery, topped with a veil-like slice of tuna crudo. The flavors and textures were marvelous. Somehow it didn't even seem like we were eating a dish of chilled raw meat covered with more chilled raw meat. 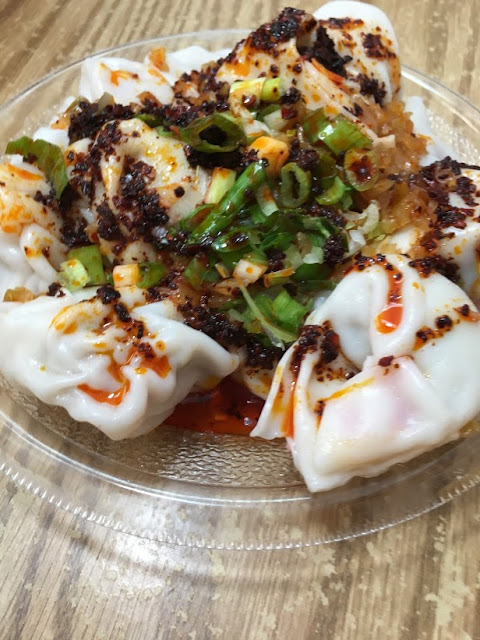 At White Bear, a little hole in the wall on Prince Street, we had the crowd favorite #6 dumplings, chili oil wontons. (Literally every customer that came in after us, along with the three already waiting for their food, ordered this dish.) With just the right amount of heat, these tender and juicy dumplings were a good introduction to our dumpling tour of Flushing.

Even better were the lamb and carrot dumplings in the New World Mall. I can't even describe how tasty these plump morsels were. They were seasoned so well, they didn't need any sauce at all. 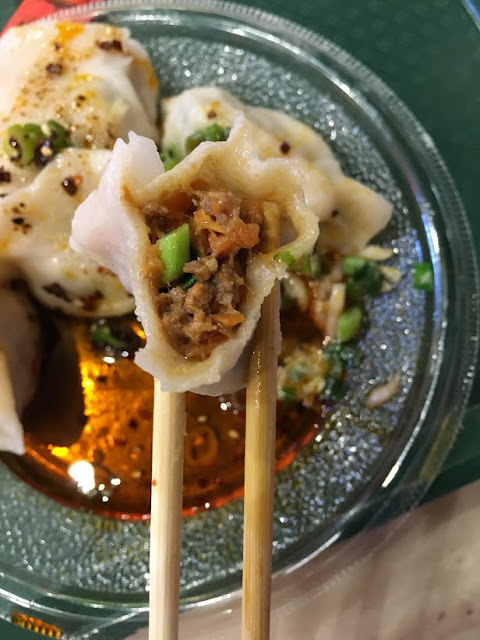 My new favorite breakfast spot in Manhattan is Pondicheri Cafe. The saag and egg toast can beat the pants off avocado toast any day, even if the accompanying kale salad tends to get stuck in my teeth. The sourdough bread, well-toasted and buttered before being topped with spicy spinach sauce and a perfect sunny-side-up egg, is alone worth the price of admission. 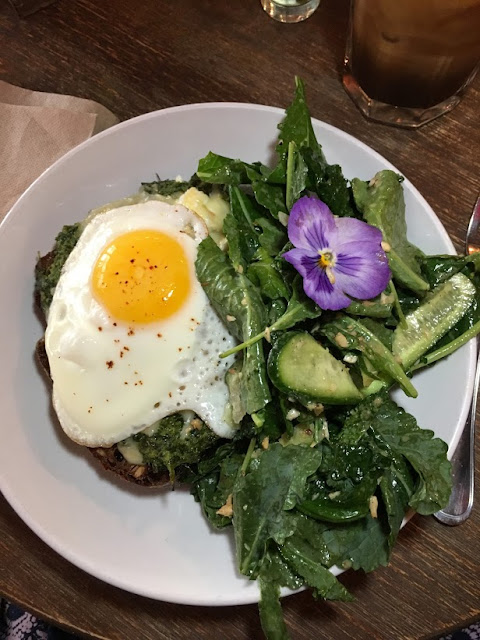 We dined at Cosima twice this year. I cashed in my OpenTable dining points for a gift card to Cosima, and we used it in March. I am never disappointed in their pizza cape sante e pancetta. In fact, it might be my favorite pizza in town. 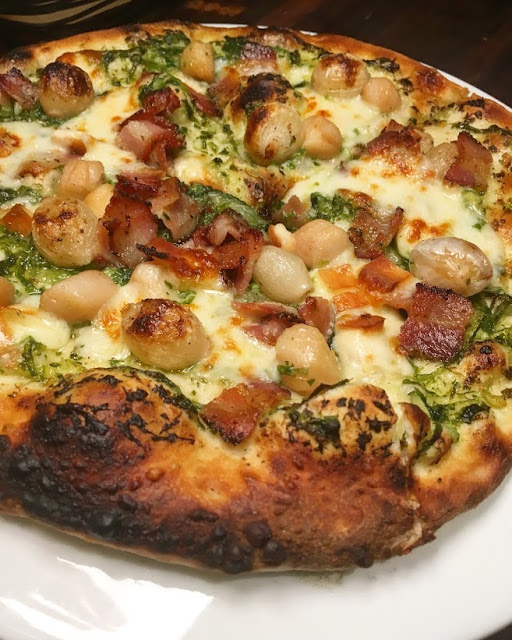 One of the many reasons 2019 sucked so badly was the demise of Grace Garden. I've eaten there dozens of times over the years and blogged about the place ad nauseum. It was my favorite restaurant. And the crispy eggplant, which was crunchy, soft, sweet, and spicy all at the same time, was one of my favorite dishes. 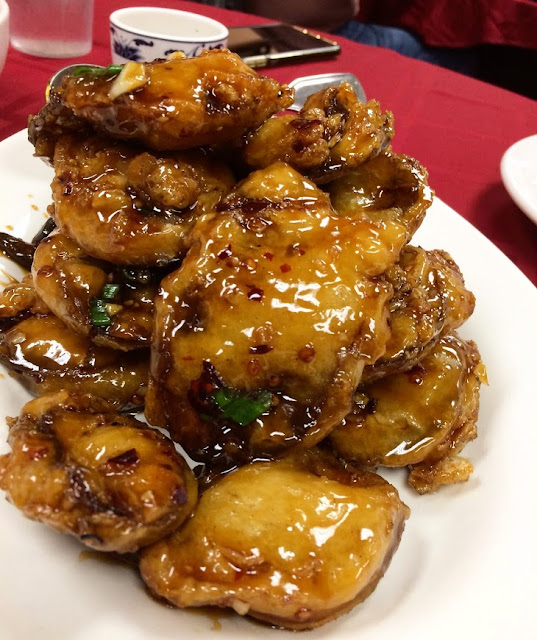 Another favorite (though maybe I shouldn't use that word--it's bad luck) place is Hersh's, where the pizza is always close to perfection, with a thin blistered crust and flavorful (and often unusual) toppings. We only got there once this year, but we were not disappointed. 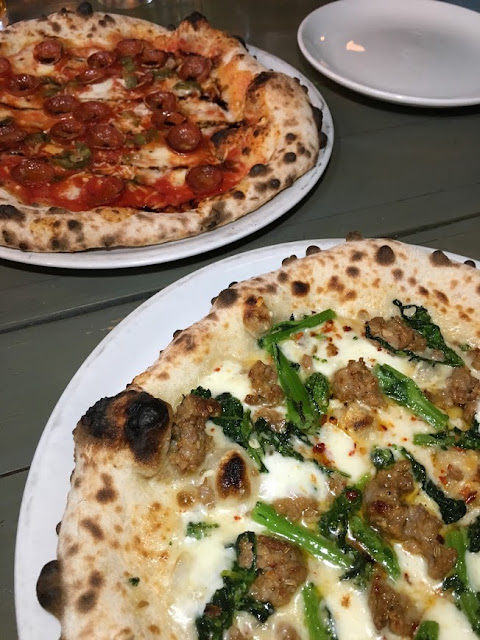 We also found ourselves at R&R Taqueria in Perry Hall an awful lot. It was one place that we knew my Dad would enjoy. In fact, his last meal outside of the hospital before he passed in November was at R&R. He loved the spicy tacos, like the chicken tinga, and he always added extra hot sauce, always remarking on the heat factor but never breaking a sweat. Me, I enjoy the tacos, but when I tried their fluffy tamales bathed in a not-too-spicy mole sauce, I fell in love. 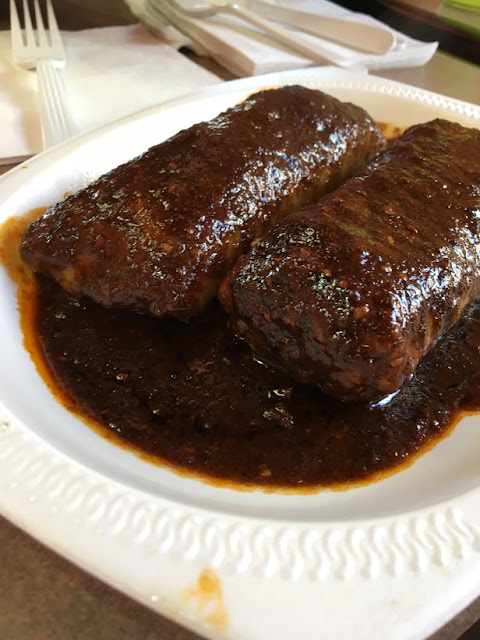 We had quite a feast at Sullivan's steak house in 2019. Though the steak was well-cooked and tasty, I really enjoyed the decadent white cheddar and bacon au gratin potatoes. I'm not a potato person, but I thought about this dish a lot this year. 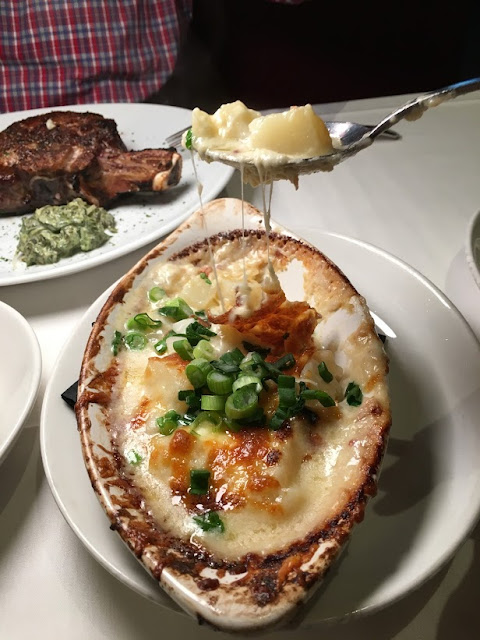 La Cuchara has the best happy hour in Baltimore. Hands down. Argue with me if you will, but it's a fight you cannot win. Who else serves generous pours of very good wine for $5 and offers half price appetizers? And I don't mean chicken fingers and onion rings. I mean these scallops. Three fat beauties, perfectly seared and still a tad raw on the inside are already a bargain at $15 if you order them while sitting anywhere other than the bar at a time other than 5-7pm or 9pm-closing (or all evening on Sunday). During Happy Hour, they are $7.50. Three scallops anywhere else will cost nearly $30. Let's go over that again. If you eat at the bar anytime between opening and closing, except between 7pm and 9pm, you can get all primeros and pinxtos for half price. Recently, Mr Minx and I had 4 glasses of wine, generous plates of lamb meatballs, shrimp with preserved lemons, and roasted carrots with chanterelle mushroom puree, plus two orders of cheese and potato croquettes, for $52. On a Monday night. Beat that. 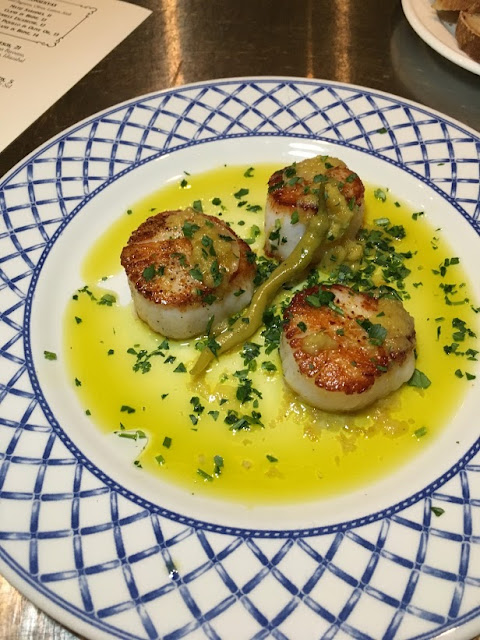 I can eat the lemony calamari alla plancha from Birroteca all day and not get sick of it. Always a favorite. I need to give a shout-out to restaurant owner Robbin Haas, who also passed away this year. He was a good guy. 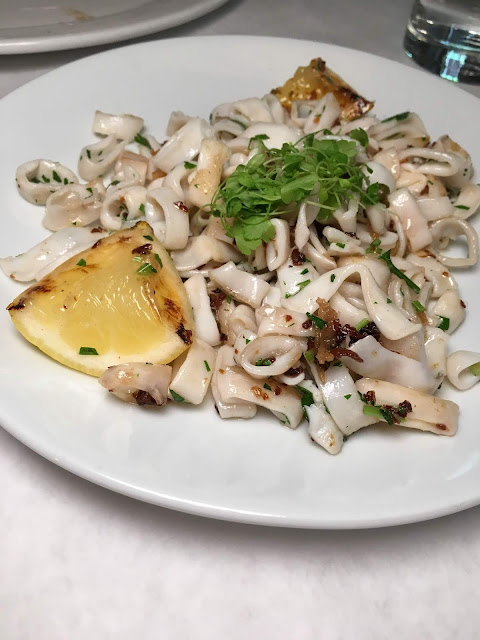 Then there was Fogo de Chao. We got to eat there twice this year, on their dime, and we were amazed at how good everything was. We used to frequent a churrascaria in Rockville called Greenfields. They were good, but Fogo blows them out of the water. (They're closed anyway.) Every cut of meat that we tried at Fogo was juicy and perfectly seasoned. The pork ribs were a favorite, but all the varieties of beef were impressive too. Can't wait to go back. I'd even pay for my own food. 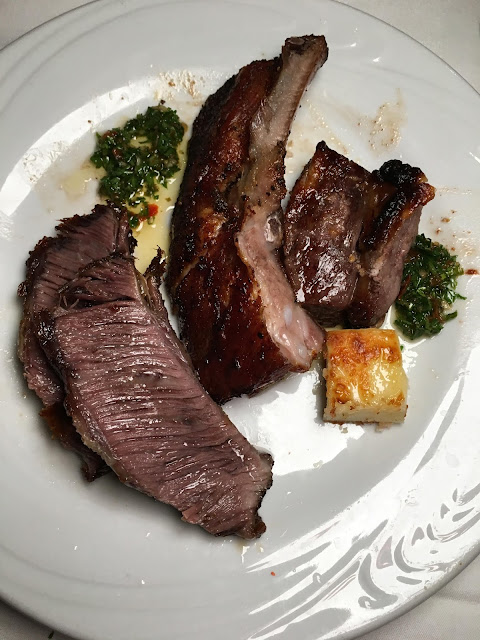 Fogo also served my favorite dessert of the year, a warm creme de coconut served with a scoop of vanilla ice cream and a flurry of lime zest. 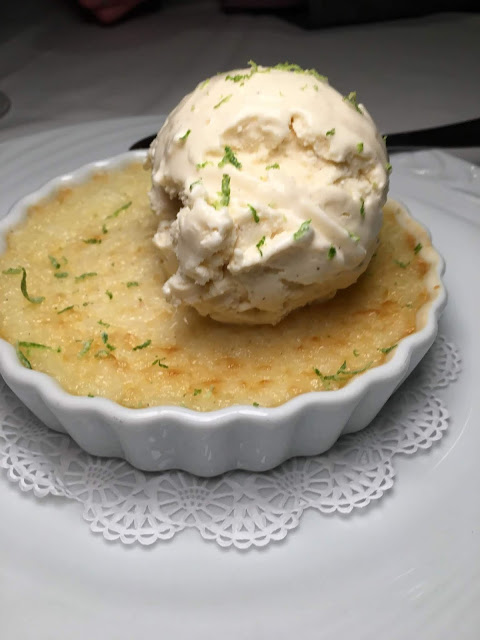 La Calle, in the downtown business district, serves some mighty fine salmon. I had it for lunch three times in 2019, and every time it was perfectly cooked (salmon should be super moist and fatty-textured, "blubbery" is the way Tyler Florence describes it) with a crisp skin. I should really try the tacos there, but then I'd have salmon FOMO. 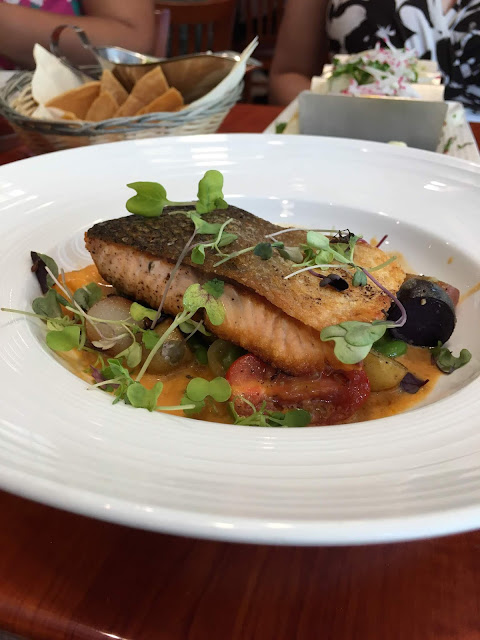 Last, but not least, was the pork belly tostada from La Food Marketa. Big-ass slabs of juicy and super porky pork belly on top of a thin and crispy round of fried masa. What else does one need? I'm also a fan of their octopus, which I ate at least twice last year, and pretty much everything else on the menu. That goes for Chad Gauss' other restaurant, The Food Market, as well. 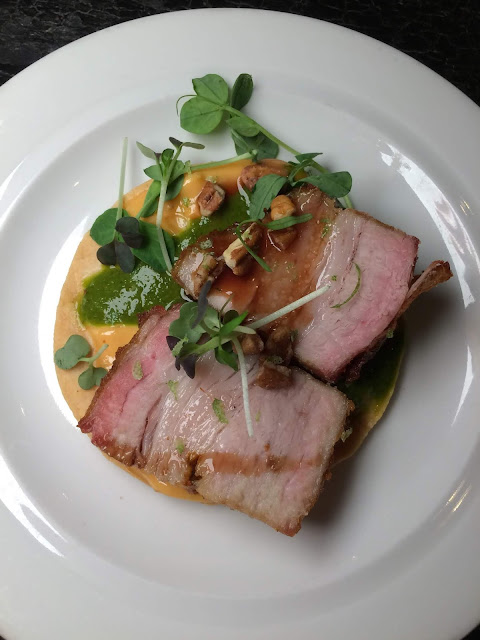 I'm sure there were other tasty things eaten last year that I've forgotten to mention. But also a lot of mediocre stuff. Here's hoping that 2020 is at least as good as 2019 and hopefully a lot better, cuisine-wise and with everything else.

Check out next week's post, which will feature some of the best things I cooked at home.