I have long lamented that there aren't any really good Chinese restaurants in northern Baltimore County. There are plenty of smaller American-style Chinese carry-outs, and Szechuan House, which has always been hit or miss. (They deliver, however, so that is definitely in their favor.) When I read in Kit Pollard's Hot Plate column for Baltimore Fishbowl that a new Sichuan restaurant opened on Allegany Avenue, we visited post haste, hoping for the best.

Red Pepper Sichuan Bistro is a rather expansive restaurant with a soothing decor and not particularly comfortable, unpadded, Chinese-style wooden chairs. The kitchen is also large and visible through a plate glass window at the back of the restaurant. Continuing the size theme is the menu, a glossy tome featuring not only lists of available dishes, but also helpful photographs of nearly all of them. Another theme of Red Pepper is spicy, which of course one would expect to find in a restaurant specializing in the cuisine of Sichuan province. My kinda food.

I'm always attracted to spicy wontons, so we had to order the Sichuan spicy wontons in red oil. I'm forever chasing the flavor of a similar dish I had years ago in a restaurant in Randallstown called Szechuan Best. There, the red oil was as aromatic as it was spicy. Red Pepper's rendition is very good, with nicely tender pork-filled wontons, but the sauce didn't have the kick that I was looking for. Still, it was pretty tasty and I'll order it again. 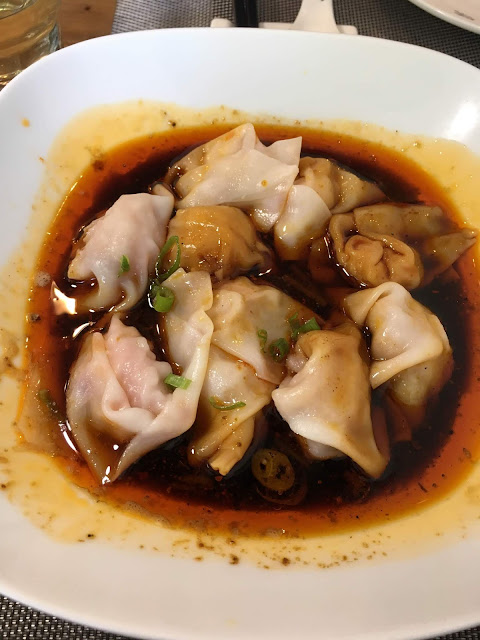 One of our two favorite Chinese restaurants is Grace Garden in Odenton, and one dish we always order there is the Sichuan pork belly, a dish of thinly sliced pork belly stir fried with chiles and leeks. We thought the Fried Salty and Dried Pork with Scallion at Red Pepper would be similar. It was, and it wasn't. When tasting the dish in the restaurant, I did notice that the pork was indeed salty, but it wasn't until I ate the leftovers at home three days later that I noticed the pork had also been smoked. Saltiness aside, the dish was quite nice, and as it was not spicy, somewhat of an antidote to the following dish. 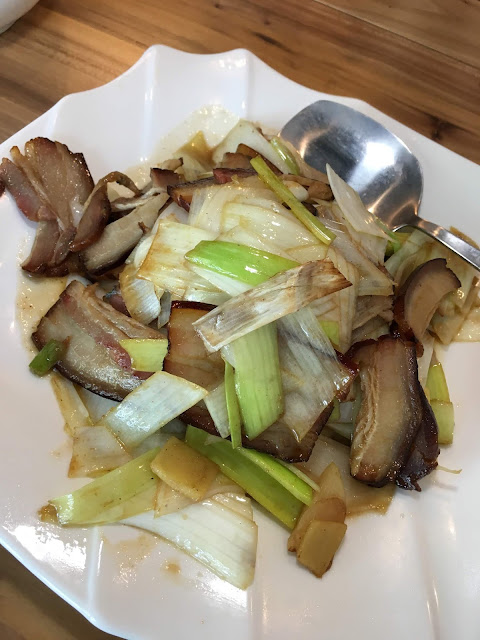 We used to get a dish called "beef on toothpicks" at our other favorite Chinese restaurant, Hunan Taste (which appears to have closed permanently). Literally fried slivers of beef impaled on toothpicks, the meat was flavored with cumin and chiles. Red Pepper offers both beef and lamb with cumin. The dishes seemed similar enough despite the lack of pointed wooden implements, so we tried the latter. Baby, it was hot, but also redolent of the promised cumin. I can dig the heat of dried red chiles, which to me doesn't last as long on the palate as that of fresh green chiles, and is much easier for me to tolerate. However, Mr Minx found it a bit incendiary. 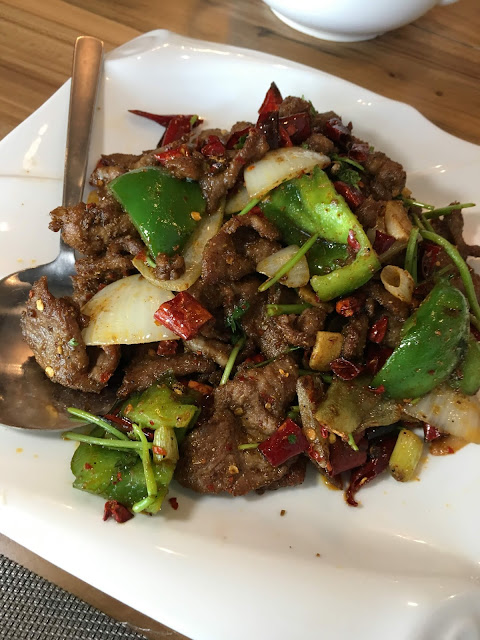 Another way to beat the heat of the lamb dish was to take bites of Shrimp with Rice Crusts. The menu describes the dish thusly: "When rice crust is combined with beef or pork, it tastes spicy. With shrimp or fish filet, amazingly, it changes to sweet and sour." The rice crusts - squares of crisply fried rice - are presented on their own in a large bowl, with the topping poured over at tableside.  Rather than some mysterious alchemical transformation, the shrimp and fish versions are simply presented in a somewhat brothy, lightly sweet and tangy sauce that is absolutely nothing like the ketchup-and-pineapple juice sweet-and-sour that Americans are used to (thank god). I imagine that the beef and pork versions have a spicy sauce, which we will have to try at another time.

The shrimp were plump and sweet, and there were a nice amount of vegetables. The rice crusts themselves have a nice roasty flavor, and I'd love to nibble them on their own. I am torn about their texture once deluged with sauce. 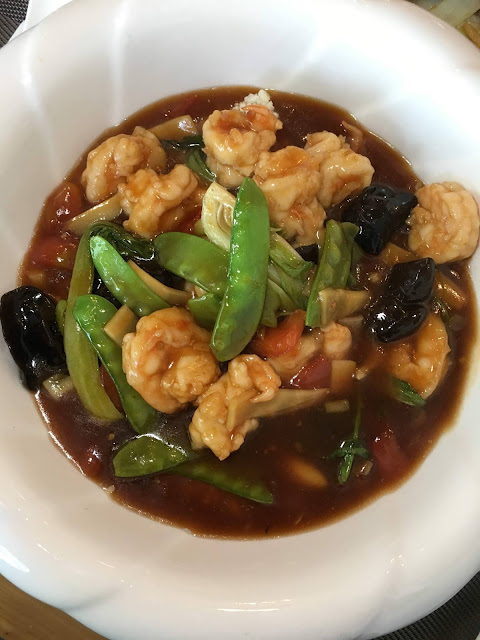 Finally, we tried the Stir-fry Green Beans, which I loved. The beans were still a little crisp, garlicky, and salty. Mr Minx likes them a little softer, and preferred the reheated beans a few days later. Still, a very good rendition of a favorite dish. 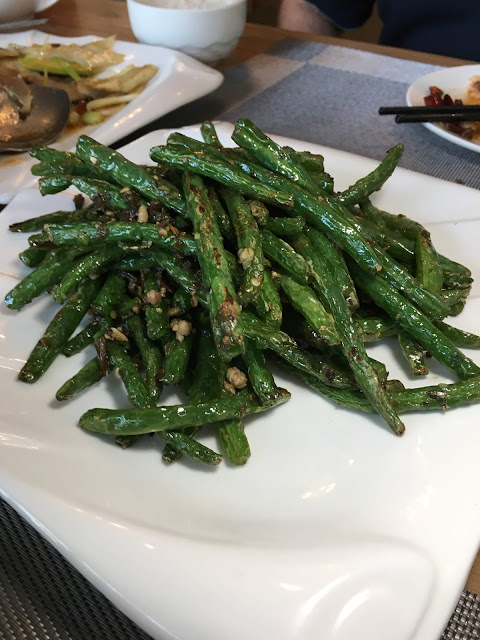 With only one visit under our belts, we determined that Red Pepper doesn't quite tickle our palates in the same way as Grace Garden or Hunan Taste, but our meal was still very good. Amazingly good for Towson. And while it might not be at the top of the heap for us just yet, we will put Red Pepper into our regular dining rotation and hope to taste most of the menu (might skip fish maw though) in the not too distant future.