I usually cook only two nights per week, Saturday and Sunday, with Mr Minx handling the grub the rest of the time. During the summer, I can be as creative as I want, doing homemade pasta or other more time-consuming things, but during football season, my Sunday dinner options must either be: 1) long-simmering; or 2) super-fast. We both grew up eating supper early, a habit that we've continued into adult-hood, so a game that starts at 1pm and ends around 4pm doesn't leave much time to put something interesting together. Even if I have a short amount of time I don't want to resort to a cop-out like grilled cheese sandwiches or frozen dinners. (For the record, we don't eat frozen dinners.) 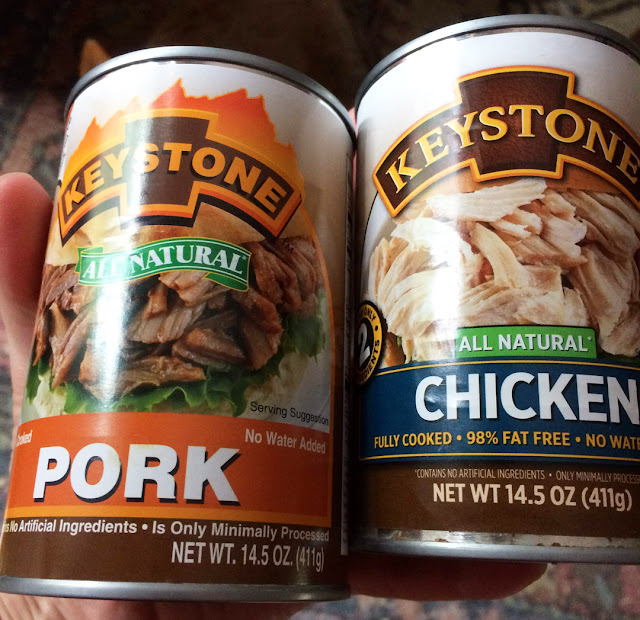 Last year I was introduced to Keystone All-Natural canned meats. Originally I was like, "what?" But then when I considered that the idea of canned fish doesn't give me a problem, why should other canned proteins? And I have to admit, the stuff is actually quite good. We made two delicious dishes with their canned beef, a Thai salad and the obvious chili, so when I had the opportunity to work with Keystone again, I jumped at the chance. This time, we received canned pork and chicken, both of which will be featured here in upcoming posts.

This weekend the Ravens game started at 4:25pm. That put an even bigger time crunch on making dinner, considering we'd be eating while the game is on. I wanted something I could put together at halftime, for second-half consumption. Pork tacos were a natural. But I didn't want to merely heat up meat and slop it on a tortilla, because I'm a creative person. I decided to revisit the recipe for a Cambodian pork dish called nataing that I made a few years back. The original recipe, from the Elephant Walk restaurant in Boston, uses ground pork, but I thought the Keystone All-Natural Pork, which comes in large chunks that could be easily shredded, would be even better in a taco. 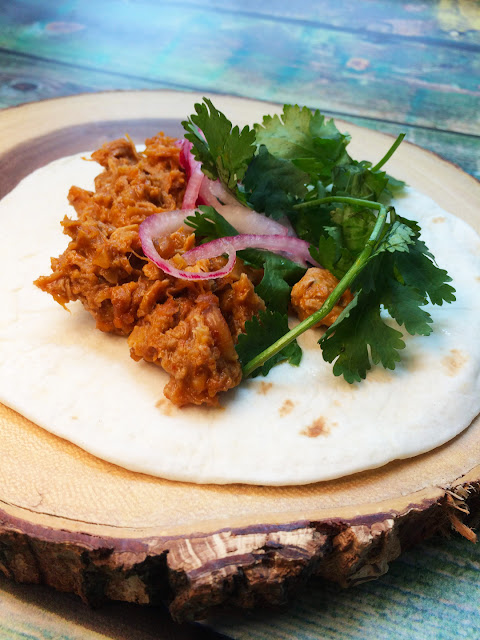 The pork and coconut milk mixture is pretty rich, so I wanted to add a tangy element to cut the unctuousness. Pickled red onion, a popular taco addition and something I already had in my fridge, seemed perfect. A healthy dose of cilantro was essential as well, for freshness. And a squeeze of lime. Chips and guac were a perfect side dish.

Already a pretty quick dish to make, the nataing was lightning fast with the canned pork. And it was quite delicious, if I do say so myself.

In a large skillet, heat the oil over medium heat and add the pork and the chile powder, breaking up the meat with a wooden spoon. Add the garlic and shallot and cook a minute or two, stirring regularly, so the garlic does not burn. Stir in the coconut milk, sugar, fish sauce, and peanuts. Turn heat to low and simmer for 10 minutes, until the shallots have softened. Taste for seasoning and add salt or more fish sauce or both.

Warm the tortillas in the microwave for a few seconds to make them more pliable. Add a few spoonsful of the pork mixture, top with pickled onion and cilantro and eat.

Slice the onion very thinly and place in a quart jar with a lid. Combine the vinegar, water, sugar, and salt in a small saucepan and bring just to a boil, stirring occasionally so the sugar dissolves. Pour the hot liquid over the onions, making sure the onions are submerged. Add the peppercorns and bayleaf if you want (chiles wouldn't be a bad idea, either.) Allow to come to room temperature before sealing the jar and storing it in the fridge.

Tip: keep the liquid after the onions are eaten to make more pickled onions. I just add fresh ones to the jar and seal up again.