Not sure if anyone knows, but I've been writing a restaurant column for the City Walker App Blog. The purpose of the app itself is to give visitors a local's-eye-view of a city, so they are able to experience it in the same way residents do--on foot. (Not that anyone actually walks anywhere anymore.) The blog offers a bit more detail; I have endeavored to take users on a stroll through the city while pointing out restaurants along the way. In addition to the walking posts, I have been writing others that put certain favorite restaurants of mine in a spotlight. I thought I could share those here with you.
----------------------------------------------------
The brick building at the corner of President and Fleet Streets--currently home to the Baltimore Civil War Museum--has seen a lot of action over the years. Originally a train station, it was involved in the Baltimore Riot of 1861, a skirmish that produced the first casualties of the Civil War. President Street Station was also the terminus for scores of Italian immigrants who had originally entered the U.S. through Ellis Island in New York and took the train to Baltimore. They came from all over Italy--from Genoa and Naples on the mainland, Palermo and Cefalu in Sicily--and many settled down virtually at the station’s doorstep in the neighborhood that became known as Little Italy. 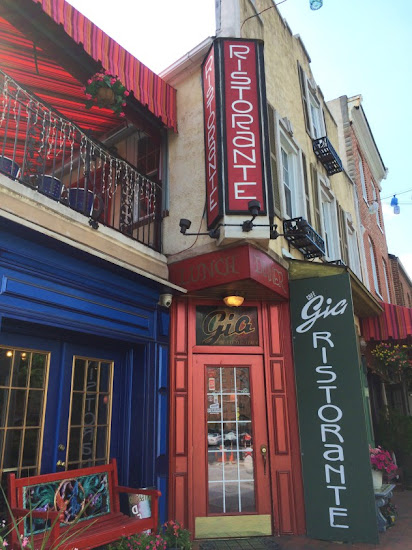 So it came to be that multiple generations of the same Italian family lived in the same small rowhouse with hopes to raise future generations in the same place. Today, most of the neighborhood is still of Italian descent, but there are folks of other ethnicities living here and there, drawn to the neighborhood’s warmth and staying power, and its proximity to downtown. The Aquia family are relative newcomers to the area, having only arrived in Baltimore from Cefalu, Sicily, in 1953. Matriarch Giovanna has said, “at a time when no one liked to move around, our family traveled 3500 miles and we haven’t moved 200 feet since.” Gia Fracassetti, Giovanna’s daughter, is first-generation American and the third generation to live in Little Italy. She decided she wanted to own a restaurant that honored not only her family’s long association with the neighborhood, but also with their Sicilian homeland. She and her Mom opened their eponymous restaurant in 2006 in a corner building embellished inside and out with colorful murals, some depicting life in Sicily, including a replica of the wedding portrait of Rosa and Pasquale, the first generation of the Aquia family to settle in Little Italy. Painted images from old advertising posters decorate the interior, and even the tabletops sport colorful illustrations, all done by local artist Yuri Fatkulin who sadly passed away not long after he finished painting those tables.

The chef at Cafe Gia is Gianfranco Fracassetti. Gian, who hails from Lombardy in the northwest of Italy, worked for a few Baltimore restaurants before ending up at Cafe Gia in 2009. After eight years there, he’s a member of the family. Literally, as he and Gia are married and have added a fourth generation to their Little Italy legacy. Chef Fracassetti’s specialty is homemade stuffed pastas, but he’s no slouch when it comes to anything else on the menu. On a recent visit, hubs and I were able to sit outside on their shaded second floor deck and enjoy the pleasant sunny weather without actually coming in contact with the sun. We ordered a special that evening, a flavorful tuna tartare with the crunch of fresh white corn and a healthy dose of garlic from the pesto aioli that bound it together. We also enjoyed a beet salad, which is not to say a green salad with a few token beets on top, but a great mound of tender cubed red barbabietole (a fun word pronounced “barh bah BYIH toh leh”) in the lightest of dressings, with a lacy garnish of finely shaved fresh fennel. I was intrigued by a pork shank braised with beer (a Flying Dog IPA) and peaches accompanied by a risotto with walnuts and broccolini. It was a dish that managed to be both rustic and elegant in all its many flavors and textures, from the porky depth of the man’s-fist-sized shank and the light sweetness of the rich sauce, to the perfectly cooked rice with vaguely asparagus-like broccolini and crunchy nuts. I loved it. My husband went classic; his order of tender veal saltimbocca had a pronounced sage flavor and just the right amount of cheese. It came with sides of roasted multicolored potatoes and green beans slicked with olive oil. A cannoli for dessert (though we were sorely tempted by Giovanna’s delicious tiramisu) and glasses of Sangiovese rounded out our meal. 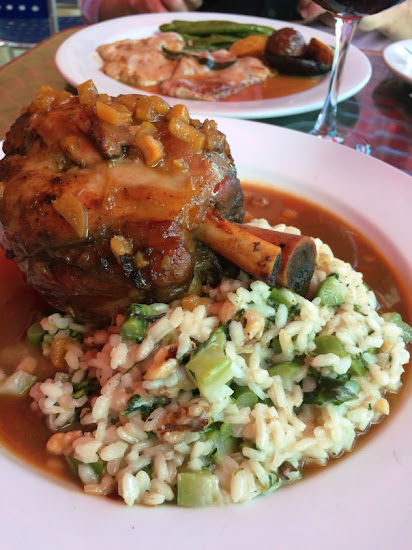 On past visits, we’ve enjoyed the grilled octopus served with garbanzo beans, the super-tender sous-vide calamari, the beefy Bolognese sauce over house-made fettuccine, and the eggplant Parmesan. Also recommended are the polpette di Luca, meatballs made with ground bison and ricotta. Though bison is a leaner protein than beef, these meatballs are very moist and tender and remind me of the ones my aunt made. She wasn’t Italian, but her father-in-law was, and his recipe made the very best meatballs on the planet as far as I am concerned. 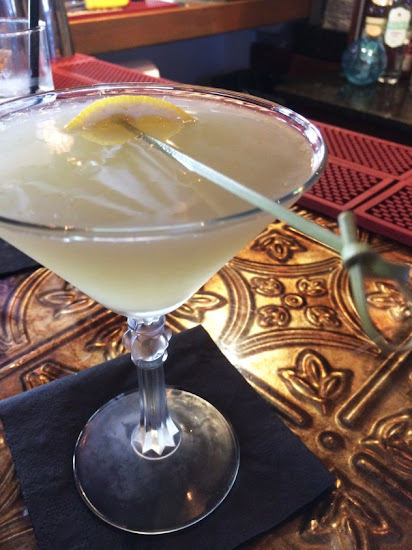 You may, of course, prefer to have a cocktail or a glass of wine with a few nibbles rather than a full meal. Next door to Cafe Gia is Pane e Vino, a sweet little wine bar owned by Steven Blatterman, Gia’s brother, but definitely a family affair. We love their specialty cocktails, our favorite being the Spicy Sicilian, a sprightly combination of pepper vodka, limoncello, kumquat syrup, and lemon, but the vodka/grapefruit/ginger flavors of the Charm City Girl and the tequila, blood orange, and ginger beer concoction called Redheads Have More Fun are tasty as well. The full Cafe Gia menu is also available at Pane e Vino, in case the crispy chickpeas on the bar whet your appetite for more.