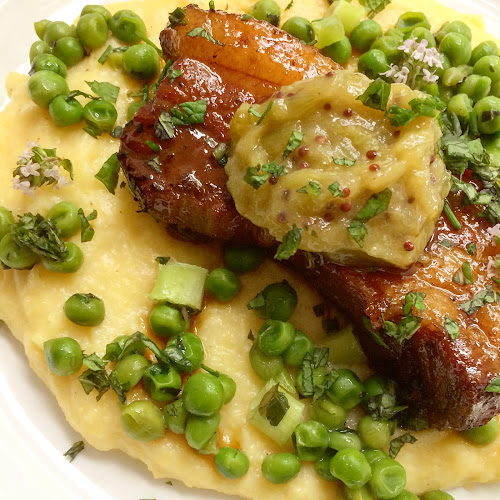 I picked up some rhubarb at the farmers' market a couple weeks ago, because I like to buy rhubarb. I never know what to do with it once I have it though. I never buy enough for pie, and even if I did, never remember to buy strawberries. Sometimes I just boil the rhurbarb with sugar for a while and call it a jam. This time I wanted to be different and try something savory. I saw something called rhubarb mostarda on a restaurant menu; a google search brought up a recipe from a blog called the Joy of Cooking. That recipe claimed to be more of a chutney than a true mostarda, and I wanted something more similar to the pear mostarda I had eaten at Momofuku Ssam Bar. That is, something that tasted very much of the source fruit, but also very much like mustard. I basically just eliminated the golden raisins called for by the recipe and changed the other proportions a bit. I also used brown mustard seeds because that's all I could find in the pantry, despite swearing that I recently bought a fairly large quantity of yellow mustard seeds for another project. (I'll probably find them when I don't need them and then misplace them again.)

What did I serve the mostarda with? Braised pork belly. I had some sliced pork belly languishing in the freezer and figured it was best to just use it up. There's really no recipe here, just guidelines: brown the pork belly on all sides. Add enough chicken stock to cover and then season it as you wish. I added a tablespoon of brown sugar, a couple glugs of soy sauce, a half-teaspoonful of grains of paradise (you can use regular peppercorns), a bay leaf, a clove of garlic, a bit of fresh thyme, some onion powder, and some smoked paprika. Cover and cook at a low simmer  until very tender, 3-4 hours. Remove the meat from the pot and reduce the sauce until it's thick and syrupy. Add the pork back to the sauce and turn to coat.

I also made some simple polenta as a base, and cooked some frozen peas (what? you think I'm going to shell peas? if I could even find them now), added a knob of butter, and lots of fresh chopped herbs from our newly-planted garden (mint, basil, chives, thyme flowers).

Personally, I think this turned out great. I should do the pork belly thing more often. It's dead simple, just throw stuff in a pot and cook it, and it comes out restaurant-quality. The fat was juicy, the meat was moist, completely yummy. And the tangy mostarda was a perfect foil.

Just a really nice dinner all around, and despite the fancy looks, not a lot of effort. I even got Mr Minx to trim and chop the rhubarb for me.

Put all ingredients in a pot and bring to a boil. Turn heat down to a simmer and cook until rhubarb is soft and the liquid has mostly evaporated. Stir regularly to prevent rhubarb from sticking (mine didn't, but YMMV.)