Mr Minx loves his pasta. I love his pasta, too.


Mr. Minx here to talk about our dinner from Labor Day: linguine and white clam sauce with shrimp thrown in for good measure.

Most of my favorite dishes involve pasta and liguini and white clam sauce is probably my second favorite thing to eat next to spaghetti and meatballs. It was a bit of a revelation for me when I first had it as a teenager because, up to that time, I thought all pasta dishes had to have a thick, heavy sauce and/or a heavy meat component like beef or pork. When made properly, liguini and white clam sauce is light and creamy with a mild seafood flavor enhanced with bright parsley notes. 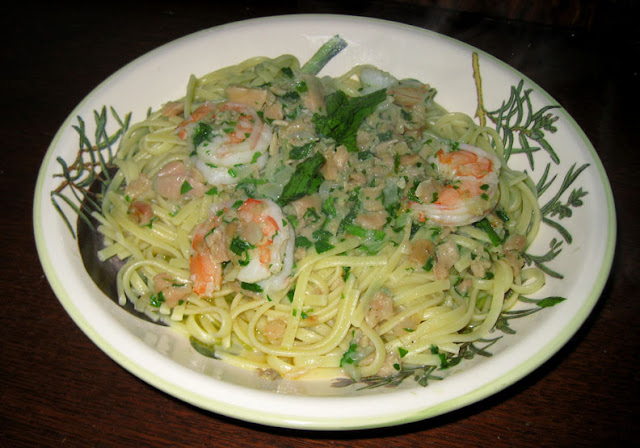 I started making liguini and clam sauce after I had it at a family get-together. My Aunt Kathleen made it for us, which was a bit of a shock since her culinary ball park was more meat and potatoes. I was sitting next to my Uncle Al and, midway through the meal, he leaned over to me and said, "This is the kind of dish I just want to keep eating and eating." I had to agree as the flavors had an almost hypnotic effect on me. He and I polished off the very last remnants of liguini in the kitchen after the rest of the family had left the table. When I asked my Aunt Kathleen about the recipe, she said, "Oh, it's really easy. You just follow the recipe on the can of clams." I did just that for many years.

There are several recipes out there, but the simplest way to make white clam sauce is to saute two cloves of chopped garlic in about a 1/4 cup of olive oil. Once the garlic is lightly cooked, pour in the juice from a can of chopped or minced clams and bring it to a simmer. Let is simmer for a few minutes and then add the clams and some chopped parsley. Salt and pepper to taste. Pour over some cooked liguini and you're all set. This should make enough sauce for two average people or just me. If Minx wants to eat, I double the recipe.

Over time, familiarity has led to experimentation, adjusting the flavors to suit my personal taste. For example, the standard recipe tells you to saute two cloves of chopped garlic in olive oil. I always tend to burn my garlic, leading to a bitter taste, so I chop up some onion and saute that in olive oil first. Then I add the chopped garlic along with the clam juice reserved from the can of chopped or minced clams. This way you get some extra texture and flavor from the onions and the garlic cooks without burning. I also like to throw in extra shell fish if they are available. In this case, I added some shrimp.

The recipe calls for 1 tablespoon of chopped fresh parsley, but more is better in my book. When I haven't had parsley, I've used fresh basil, but it creates a different flavor. Everything with basil in it tastes strongly of basil, which isn't a bad thing necessarily, but parsley is less dominant. It just gives a bright, herbal note without overpowering. Some lemon juice can't hurt either.

Liguini and white clam sauce is one of those fun dishes because it is insanely easy to make, comes together in less than one half hour, and can be riffed on in so many different ways. I could never understand ordering this dish in a restaurant when anyone can make it well at home. You just have to make lots of it because, once you start eating it, you can't stop.