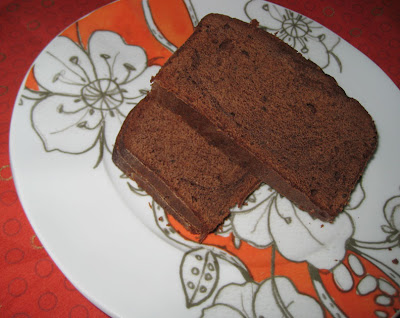 We ran out of Christmas cookies recently (yes, we did bake a lot!) and needed something else to put in our weekend bowl of ice cream (along with the ice cream). Mr Minx suggested chocolate pound cake, so I searched through our cookbook collection for a recipe that: 1) required regular cocoa powder; 2) did not require buttermilk or sour cream. Because I wasn't going to run to the store.

The cookbooks let me down, so I consulted teh Innernets. Martha Stewart offered a recipe that fit the bill, but I went back to Google to find something better. And I did - at Cook's Country. Hey, if the folks at America's Test Kitchen/Cook's Country come up with something, what with all the intense noodling around they do with recipes, I figure it's worth a try.

They say, "We retooled the classic pound cake recipe to make it plush and ultra-chocolaty. We did away with the need for chemical leaveners by properly creaming the butter and sugar." And damn if the result wasn't indeed plush - the cake's crumb is very fine and dense, resembling suede. And beating the hell out of the butter, sugar, and cocoa mixture before adding the eggs did create a cake that rose high in the pan without the use of baking powder or baking soda. The Martha Stewart recipe called for only 1/4 cup of cocoa powder, plus chocolate chips. It's probably not as chocolate-y as a recipe with 3/4 cup of cocoa plus an additional 2 ounces of milk chocolate. Oh, and while it calls for Dutch process cocoa, because there's no leavening in the cake, regular cocoa (Hershey's) works just as well.

Tastes marvelous with ice cream, and on its own as well.