The First and Last Time I Make Buckwheat 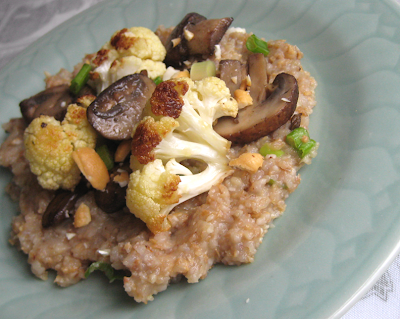 A while back, I was browsing Amazon and spotted a book called The New Whole Grain Cookbook: Terrific Recipes Using Farro, Quinoa, Brown Rice, Barley, and Many Other Delicious and Nutritious Grains. I've been trying to get more whole grains into our diet, so I ordered it.

We had quinoa and farro in the house, but the first recipe I wanted to try required buckwheat. This despite remembering that Mr Minx had complained about the god-awfulness of the buckwheat pancakes his mama used to make. I chalked that up to his mother's cooking, and not to the buckwheat itself, because he really enjoys buckwheat soba noodles. I bought a box of kasha, or buckwheat groats, and set to making buckwheat and broccoli salad with tangy miso dressing.

The recipe's intro reads, "the dark flavor of Buckwheat gives this salad a range of tastes, from the deep, nutty grains to the tangy, sweet dressing." I thought that sounded amazing...because I had no idea what the author was referring to when she wrote "dark flavor." The only experience I had ever had with buckwheat was with the breakfast cereal, Buc Wheats, which didn't necessarily contain actual buckwheat and had a nice maple-y flavor.

The first part of the recipe involves toasting the groats (which seemed ridiculously tiny to me, like sawdust, but maybe it was just the brand I used) until "crackling, hot to the touch, and fragrant." They did get very hot to the touch, but didn't crackle. And to say they were "fragrant" might be a bit generous. They flat out stunk. Like burnt non-stick pan. They tasted that way, too. Mr Minx said, yup, just the way he remembered.

I hoped that the miso dressing would hide the burnt flavor, and it did somewhat. Because my groats were so tiny, I had to make half again as much of the miso/sesame oil/ginger mixture to coat them all. That was fine, because I had plenty of miso and whatnot. And me being me, I didn't make the whole broccoli and carrot part of the recipe because what I had on hand was cauliflower and mushrooms. The cauliflower I roasted with garlic (just like this broccoli), and I sauteed the mushrooms with a little olive oil and salt over high heat. Added to the buckwheat "salad" (it looked more like oatmeal), it actually tasted just fine. More than fine, actually - it was good.

Until Mr Minx had the stomach cramps overnight. Methinks we'll avoid buckwheat from now on. But I liked the recipe - ok, the idea of the recipe - so I might try again with farro or wheat berries.