Had I made it past the first round of Project Food Blog, this would have been my second post.

The challenge was to tackle a classic dish from an unfamiliar ethnic cuisine. Being a huge fan of fusion food, I've already dabbled with flavors from most Asian and European countries, and a bit of the Americas. Africa however, was pretty much wide-open, uncharted territory for me.

There are so many countries in Africa of which I know nothing - Burkina Faso, Gabon, Zambia - so the question became "which has a compelling cuisine?" I immediately thought about Namibia, because Anthony Bourdain had filmed an episode of No Reservations in that country on the Southeast coast. My next thought was the memory of his dining on warthog anus, a special delicacy bestowed on him as a guest. It seemed easy enough to prepare: slaughter a warthog; remove its intestines; give a quick grilling after an even quicker cleaning, and enjoy al dente. But should I ever want to dine on the digested fecal matter of Phacochoerus africanus, I think I would be hard-pressed to find it in the local supermarket.

Needless to say, I don't want.

My friend Pam's husband is originally from Nigeria, and I briefly deliberated whether I should contact her for recipes before I decided that I should prepare something slightly more familiar. I have eaten authentic Ethiopian food exactly once, about fifteen years ago, at a little hole-in-the-wall that's no longer in business. It was overly hot to my palate, but the method of eating was intriguing. Injera, a crepe-like bread made from the grain teff, was used as both the serving platter and the utensils. A quick trip across teh innernets revealed that injera didn't seem that difficult to make, and I was sold. Within minutes, a bag of teff flour was winging its way from an online purveyor to Casa Minx.

Because I am challenged to make an authentic dish, I dismissed the idea of making fellow blogger John's extremely inauthentic and possibly sacrilegious Bacon and Pancetta Wot. I have tasted it and can attest to its deliciousness, but it would simply not do for my purposes. Instead, I decided to tackle Doro Wat, a classic stew made with onions and chicken and seasoned with the predominately fenugreek-and-chile-flavored spice mix known as berbere.

First, I made the injera, using this recipe. The result was an unmitigated disaster. While the batter fermented nicely within 2 days, cooking it was another matter entirely. The batter stuck to the pan, even when using oil. The texture was extremely delicate and tore in multiple places when I tried to move it to a platter, and even though it seemed done (by recipe directions), it had an unpleasantly mushy "raw" quality to it. And when the pancakes cooled, they became brittle.

With a minor crisis on my hands, not to mention mushy bread dough on my fingers, I scrambled for an alternative. This bread wouldn't stand up to being used as an eating utensil, plus it didn't taste very good. And as the other dishes were cooking already, a solution had to come quickly. Perhaps if the injera was more like a French crepe, it would be more pliable? I tested my theory with a new batter using a 1:1 proportion of teff and wheat flour, plus milk and eggs.

The new bread didn't have the characteristic air bubbles, but it held together and was fairly easy to manipulate to pick up morsels of food.

Because man does not live by crepe-like bread (and chicken) alone, I also made a vegetable stew, Yetakelt Wat, and a salad of tomato, cucumber, and lettuce dressed simply with olive oil and lemon juice. 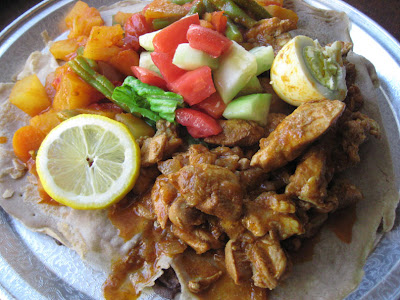 Although the bread caused problems, the rest of the meal came out beautifully. Piled onto an injera-lined platter (some pieces of the original batch went down first, to lend a stronger teff fragrance), it looked relatively authentic, and tasted FABULOUS. Seriously. The chicken was tender, very spicy and hot, but the heat was tempered a bit by the teff crepe. The vegetables, although similarly spiced, had a different, somewhat sweet, flavor profile due to the tomato paste.

Being unused to such messy finger food made eating a bit awkward, but Mr Minx and I soon got the hang of it and finished up every last delicious bit. Except for the bottom-most layer of all-teff injera, which was sadly relegated to the trash can. 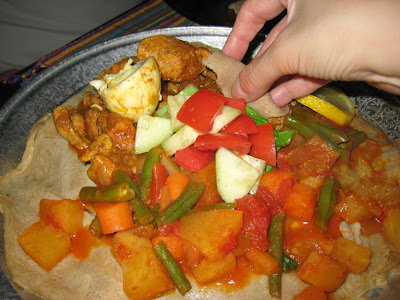 While my experiment wasn't 100% successful, I'd say it was pretty close. And now that I have leftover berbere and the spiced butter known as niter kibbeh, I'm very likely to make Ethiopian cuisine again in the near future. Even the injera (although I'd try another recipe, perhaps this one). Of course, the way my mind works, I'm more inclined to take the flavors of Ethiopia and apply them to Western dishes.

Berbere-spiced spaghetti and meatballs, anyone?
Posted by theminx

Sorry the first round of injera didn't work :( I still haven't bothered to try it. The latter batch looks lovely though, as well as your much more authentic and certainly not sacrilegious doro wot :)