When Cypriana was downtown, sprinkled here and there in office buildings and in the University of Maryland hospital, they specialized in things like kebabs and salads. I loved their Greek salad, the typical inauthentic pile of lettuce with cucumbers and tomatoes, topped with a generous amount of feta cheese and a cup of creamy tarragon dressing on the side. The dressing really made it.

A few years back, they closed their fast casual restaurants and opened a full-service place in the Broadview apartments, former home to the venerable French restaurant Jeannier's, among others. I'm not sure why we put off going for so long, but this spring we finally paid Cypriana a visit. It was a pleasant evening, so we asked to sit on the patio, which may or may not have been a good idea. The restaurant's patio is divided into two areas, one more loungy, and the other for dining. After we were seated, we noticed a lot of musical tables and chairs being played by a trio of people who were apparently hosting a graduation party. They never seemed particularly satisfied with the number of tables pushed together or the chairs arranged around them, and the whole thing got uncomfortably close to where we were seated. As in, perhaps one of us would get smacked with a heavy metal table or chair. Fortunately, seating arrangements were resolved before I felt we had to move out of the way.

But then the kids happened.

There must have been a large party inside, one with many small children. Many small children who decided to run around outside on the patio. A patio that is actually a large balcony. Had any of those children been curious enough to climb the short wall to see what was on the other side of the balcony (a drop into a courtyard), there may have been a tragedy. One parent was outside briefly, sitting on a chair and playing with his phone while the children ran in and out of not only the dining room entrance, but also the ramp into the kitchen entrance. Bad enough they caused a ruckus on the lounge section of the patio, but they also decided to run around in the increasingly more crowded dining section, hiding behind tables and running around servers with full trays of food.

And nobody said a word to anyone.

I'm not sure why half a dozen kindergartners were allowed to run around largely unsupervised in a restaurant. I don't understand why parents cannot parent their children.

Anyway...Cypriana is lucky that neither of us got belted by a chair or had food spilled on us by a waiter who had to avoid rugrats. And the food was good. 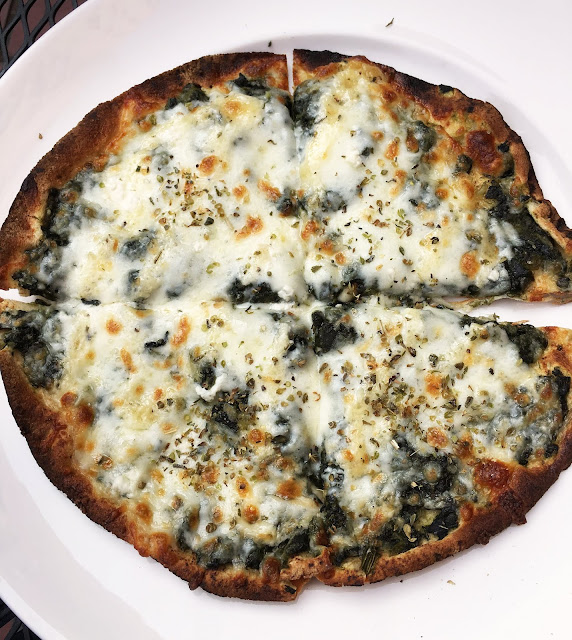 We mostly stuck with mezzedes, small plates. We tried the spinach and feta flatbread, which was crispy and melty and nicely cheesy. 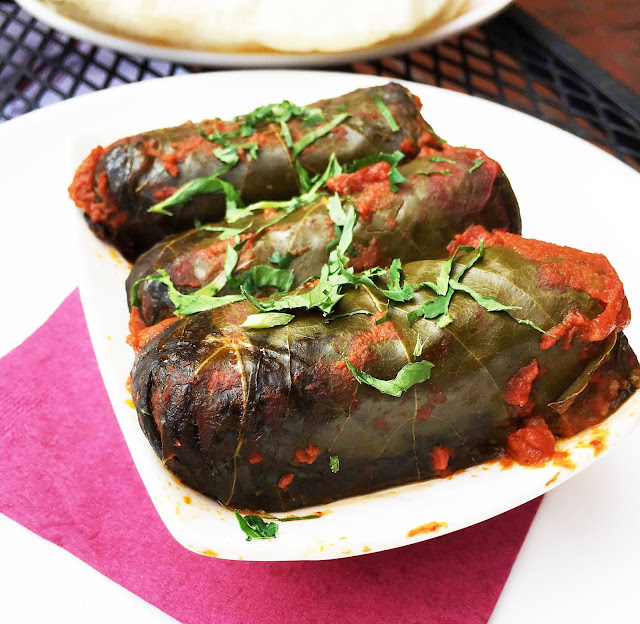 Also the beef- and lamb-stuffed grape leaves. They were much larger than normal grape leaves, and really very nice, with flavorful filling and tender leaves. They were supposed to come with a yogurt sauce that our waiter forgot, promised to bring, but never did. I suppose they didn't need it. 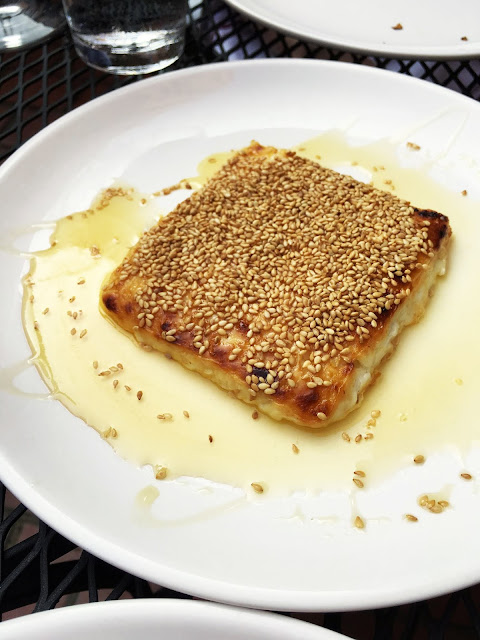 The sesame roasted feta was drizzled with honey and served with fresh hot pita. I love baked cheese, and could have eaten a few more slabs of this stuff.

We also had the "Mousaka of Cypress," a small and unphotogenic ramekin with layers of eggplant, zucchini, potato, and a beef and lamb mixture, covered in a dreamy bechamel. It was quite possibly the best moussaka I have ever had. 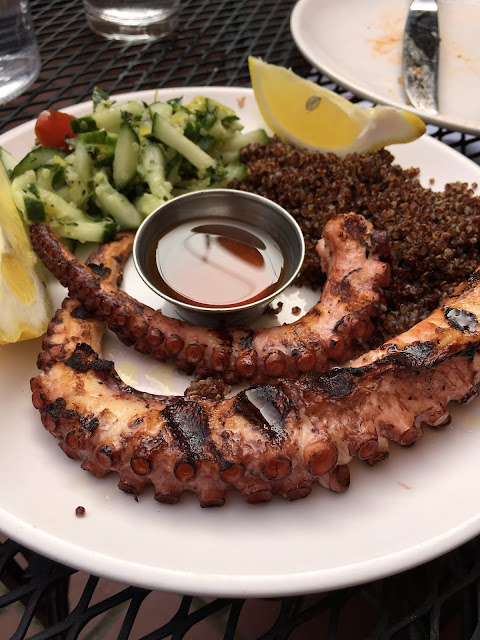 We tried one entree dish of tender grilled octopus served with a cucumber salad (called tabouli on the menu) and some red quinoa, which brought nothing to the plate. The octopus itself was very nice. I tried dipping it in the container of what appeared to be plain, unseasoned, red wine vinegar, and felt that it was fine on its own. 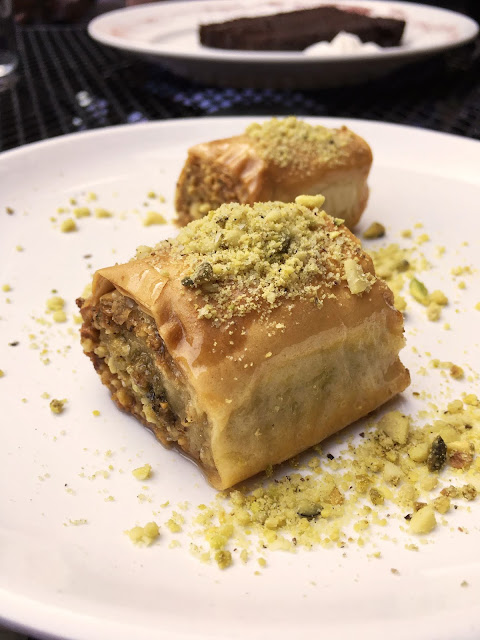 We couldn't pass on dessert, especially when pistachio sea salt baklava was on offer. Made as individual pieces rather than in a large pan, it made for a much neater serving, though it was a bit difficult to cut into bite-sized pieces. The flavor was very good though. 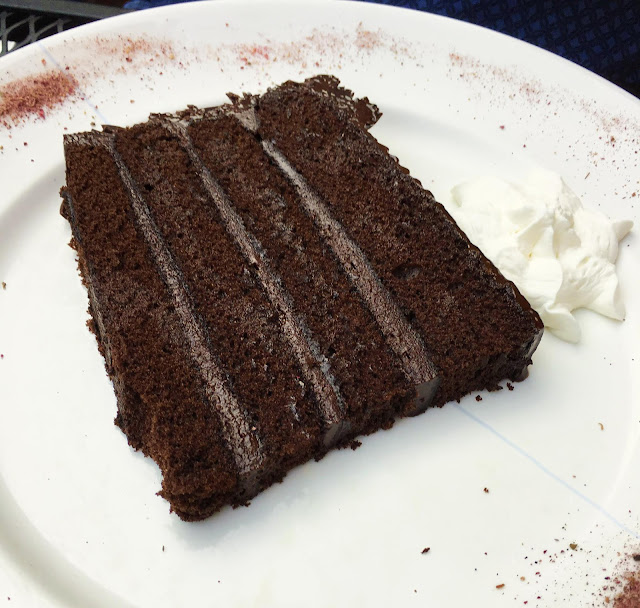 The menu lists the chocolate rose cake as "layers of dark chocolate cake with rich Belgian chocolate and edible roses with a semi-sweet fudge icing." I figured the "edible roses" were made of frosting, but no, there was a definite rose flavor to the cake, and pulverized rose petal dust garnished the plate. I never would pair chocolate with rose, and while it worked here, I still probably won't pair those two strong flavors. The cake was otherwise moist and quite good.

I have mixed feelings about Cypriana. While by and large the food we had was good, the service was meh (still waiting on that yogurt sauce!) and the rugrat disturbance was pretty inexcusable. I can perhaps understand that management might not have wanted to upset their customers by asking them to mind their own brats (Really? I actually do not understand it at all.) but why sacrifice the enjoyment of the other diners?