Chicken with Mushrooms and Bacon 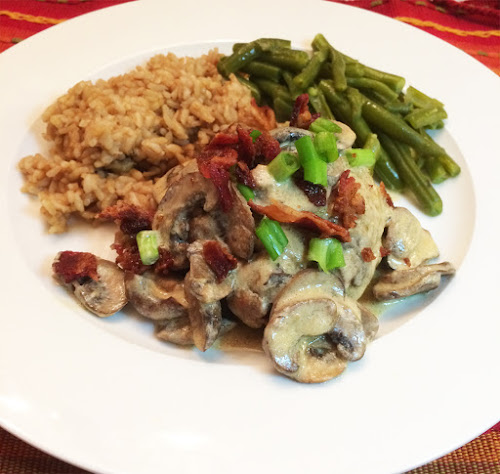 My Mom always claimed not to enjoy cooking; she only did it because she had two children to feed. Dinners usually consisted of Shake-n-Bake pork chops or chicken, canned green beans or corn, and instant mashed potatoes or Minute Rice. Sometimes spaghetti with jarred sauce and meatballs (at least those were homemade). We were lucky to have an apartment in my Grandmother's house, and every few days she'd give Mom a break by cooking dinner for all of us.

Once my brother and I were adults, or at least college-age, Mom started to take a surprising interest in the kitchen. She was actually a pretty good cook when she wanted to be. With less responsibility during the day, she would pass the time watching cooking shows on PBS. During pledge drives, Mom opted to donate when the free gift was a cookbook. I still have several of the Frugal Gourmet's books in my collection. I liked watching The Frug, even if he did turn out to be a perv. Mom also liked Madeline Kamman, but I found her accent grating (sorry, French people) and was particularly annoyed by the "ehhh" sound she made after every other sentence or so. I have one of her cookbooks, too, Madeline Cooks.

Mom tried one recipe, and one recipe only from Madeline Cooks: chicken cutlets with mushrooms and bacon. It was so good, and so fast, she made it frequently. There's something almost magical about the simple combination of bacon, mushrooms, and scallions. Oh, and cream. Hell, you don't even need the chicken.

I think about this dish once in a while, when I have bacon and scallions in the house but not chicken or mushrooms, or some other incomplete combination of essential ingredients. I decided to dust off that 30-year-old cookbook and make the dish myself, but with chicken thighs, just to be different. It throws off the cooking time a bit, particularly with bone-in, skin-on thighs that need to be browned first and cooked longer, but the combination of flavors was still the same, still almost magical. And it brought back memories of my Mom in the kitchen, in those few years when she actually seemed to almost enjoy cooking.

I served the chicken with chicken flavor Healthee USA organic brown rice. Just 90 seconds in the microwave, fluff, and eat! I'm too impatient to cook brown rice properly, so it's usually chewy. Healthee's is nice and tender and I don't have to worry about making a side when I have a couple packs on hand. And green beans, cooked low and slow for a long time, the way my Grandma made them.

Chicken with Mushrooms and Bacon (adapted from Madeline Cooks)

Season chicken with salt and pepper. Place skin-side down in a pre-heated skillet and cook over medium-high heat until skin is browned. Turn chicken and brown other side. Cover the pan and turn the heat down to medium. Cook the chicken for 10 minutes, then remove the chicken from the pan to a plate. Remove all but a tablespoon of fat from the skillet and add the mushrooms. Cook over medium high heat, stirring frequently, until they have given up their juices and have started to brown. Add the chicken back to the pan, turn down the heat, and cook an additional 10 minutes. Remove lid, turn up the heat, and add the chicken stock and cream. Bring to a simmer and cook until the sauce coats the back of a spoon.

To serve, put each piece of chicken on a plate and spoon sauce and mushrooms over. Garnish with crumbled bacon and scallions.