Because my dear husband and I had marvelous meals at Bobby Flay's Mesa Grill in both New York and Las Vegas, we thought we'd give Bolo a try. Until recently, I had never been particularly interested in Spanish cuisine, but the tapas trend has got me hooked.

Bolo has a four tapas for $16 deal that seemed quite reasonable, so we tried a few items we've never had before, like crispy frog's leg with mint & garlic and a salt cod fritter with parsley garlic sauce. Our choices were presented in a square plate with four individual compartments. Mr. Minx's carby choice of twelve layer potato with caramelized shallots was the best of the bunch, with meltingly tender potato, seasoned subtly with onion, and perfectly caramelized shallots. A big bowl of this would have made me very happy. The next favorite was a bit of pan fried duck liver with sherry vinegar, honey, & black pepper. This was not foie gras, but the more strongly-flavored liver of a normal duck, cooked lightly and dressed with a nicely acidic vinaigrette that cut the richness of the meat.

The salt cod fritter was largely potato, and it reminded me of an old-fashioned Baltimore coddie, sans mustard. Last was the frog's leg, which indeed tasted "like chicken," but with a touch of the sea. It was completely unremarkable, apart from its novelty value. 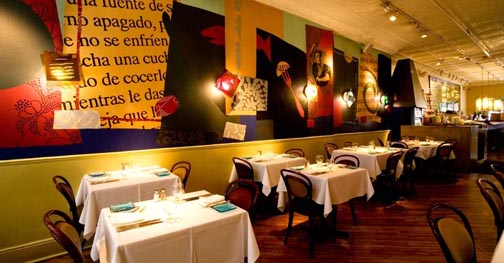 We sat at the table against the wall on the leftmost side of the picture.

Our salad course was the duck course for this meal. Since I had the duck salad the night before, it was my husband's turn to have it tonight. His preserved duck salad with tangerines, pomegranates, & spicy almond brittle consisted of a very generous confitted duck thigh, on the bone and with crisped skin, next to a little pile of white endive and other greens. The duck was meltingly tender, and the almond brittle was a lovely touch that added a bit of sweetness to a savory dish. Truly delicious. Never having tried merguez before, I was interested in the white chicory salad with spicy lamb sausage, poached egg, and mustard-toasted almond vinaigrette. It struck me as I was eating this that it would be a perfect breakfast dish. The sausage was definitely spicy, but the heat was tempered by the mildness of poached egg and the light dressing. The egg was a bit overcooked, as the yolk did not ooze gracefully over the greens but rather sat on top as a bright orange semi-orb. Regardless, the combination of flavors worked well and I did enjoy the salad.

The two entrees that were the most attractive to Mr. Minx and myself were the black squid ink risotto with grilled prawns, lobster, & green onion vinaigrette and the pork tenderloin with walnut romesco, oloroso sherry-fig sauce, & whipped green onion potatoes. The risotto was a gorgeous pile of glossy, jet black rice, topped with two head-on grilled prawns, and a ring of green onion vinaigrette around the very edge of the bowl. My first forkful tasted of chile, and my second of green onion, so I am guessing that Bobby Flay's famous squeeze bottles of chile and scallion oils were also employed on this dish (as they were on all of the tapas items). The vinaigrette gave yet another, tangy, variation of onion flavor to the dish. The bits of lobster were perfectly cooked, but one of the prawns was a little mushy. And the rice was softer than that of classical Italian risotto; still, I would fight over this dish. Not only was it beautiful, it was a festival of flavors.

Not so the pork tenderloin. I had the pork tenderloin at Mesa Grill and it was glorious; served medium, it was tender and juicy. The three large chunks of pork in the Bolo dish were sadly dry and overcooked, and the sauce was too darkly flavored, like burnt licorice. The potatoes were pretty, but did not have the flavor to stand up to the overwhelming sauce. And the walnut romesco went completely undetected. With better cooked pork, a lighter version of the sauce, and a stronger starch like sweet potato mash, this would have been an excellent dish as well. Perhaps it was merely an off night.

Finally, dessert. Mr. Minx chose the sherry-Robiola cheescake with fruit shortbread crust, citrus granita, and apple cranberry compote. (Robiola is an Italian soft-ripened cheese, similar to cream cheese.) The cake was topped with a bruleed sugar crust and was delicately flavored with sherry. The best part of the dish was the amazing granita that was both fantastically tart and sweet at the same time, and a perfect accompaniment to the creamy cake. My caramel apple date cake with warm toffee sauce and vanilla creme fraiche ice cream was also quite good, although the toffee sauce didn't taste of much at all, and the ice cream could well have been made with regular cream. Both desserts went well with the remainder of our 2005 Christopher Creek Zinfandel.

Although not quite as good as Mesa Grill, I still would go back to Bolo just for the risotto.