I Propose a Gjetost 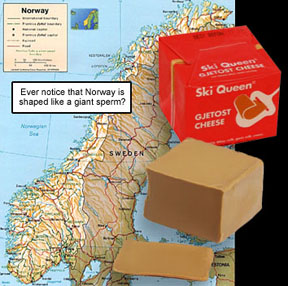 What the heck is gjetost? I'm pretty sure I remember seeing it sold in Miles Kimball catalogs when I was a kid, and I thought it was some sort of novelty item...Sponge Bob Squarecheese, if you will. Well, it is a bit novel, outside of Norway that is. Gjetost is a cheese made by boiling the leftover whey of cow's and goat's milk until the lactose caramelizes, producing the cheese's Malibu Barbie-tan color. Yes, this cheese is sweet, and has a pliable texture rather like fudge. It also has a pronounced "goaty" flavor, which of course is not at all unpleasant (unless one doesn't like goat's cheese). Gjetost is very much like a solid version of goat's milk caramel, or cajeta (major yum!)

So why am I writing about gjetost? Well, I sent my DH out to buy some goat's cheese for a salad, telling him make sure the cheese was somewhat firm. Not being a goat connaisseur (yet), he bought two kinds, one of which was gjetost...because it felt firm. Not what I was looking for, but what the hell - we'll try it.

Last night's dinner consisted of soupe a l'oignon, sans crouton (DH doesn't like the roof-of-mouth skin-ripping burn of traditional meltycheese bread topping) and an array of cheeses that had been collecting in our fridge, one of which was the red-wrapped cube of Ski Queen.

I tentatively cut off a thin sliver, not quite knowing what to expect, but anticipating the sweetness. It's...interesting...somewhat of an acquired taste, as it doesn't seem to belong on a cheese plate at all. It competed with the vinaigrette on the salad and with the soup. I can see how the Norwegians eat it for breakfast, on bread or crispbread. It would probably work very well with an accompaniment of sliced apples or pears. And looky - I found actual recipes on the 'net. If you try any of them, do let me know.